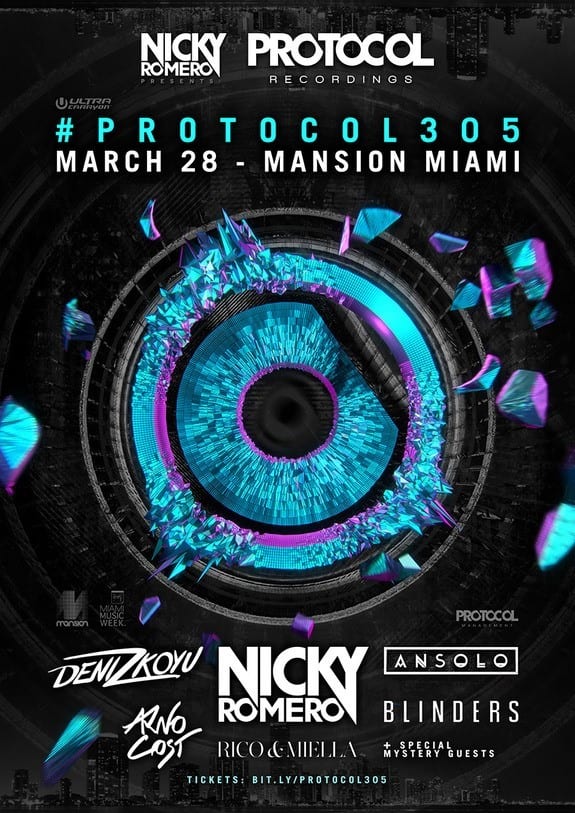 Set to take over the legendary Mansion nightclub on Miami’s iconic Washington street strip on Saturday, March 28, the lineup has been a closely guarded secret…until now.

With hype surrounding the recently announced event already at fever pitch, it can now be confirmed that Nicky Romero has enlisted his good friends and Protocol veterans Deniz Koyu, Arno Cost, Ansolo, Blinders, Rico & Miella, plus a ton of special mystery guests to join him for what will no doubt be one of Miami Music Week’s most in-demand parties this season.

If history alone were anything to go by, Nicky Romero Presents #Protocol305 will be one of the highlights this coming Miami Music Week. With every previous Miami Music Week show having been road blocked, and sold out, the kudos this show has gained over the past two year makes #Protocol305 one not to miss.

Ever since its conception in 2012, Nicky Romero’s Protocol Recordings has been praised for the quality and consistency of curating the most adept international roster. Known the world over for their proficiency in continually hand picking dance music’s most groundbreaking tracks from the most innovative artists, this esteemed label is showing absolutely no signs of slowing down. As Nicky and his label prepare to take over Miami, #Protocol305 will further prove testament as one of the most sought after record labels in the industry.

Watch the official aftermovie of Nicky Romero’s Miami Reboot party from 2014, where superstars such as R3hab, Nervo, and John Dahlback graced the decks for this sold out day party at LIV Ocean Club!