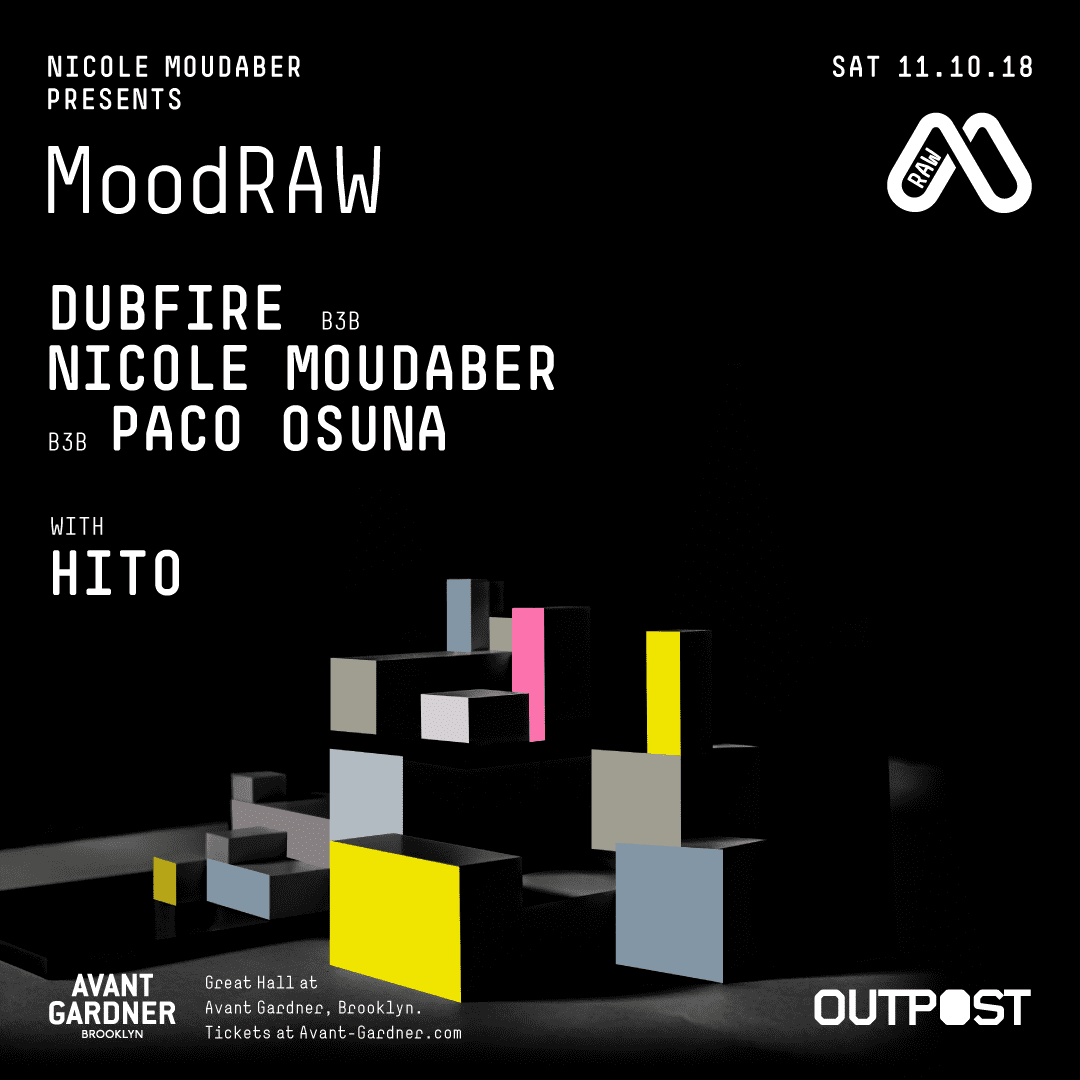 Fresh off a stellar MoodZONE showcase at The BPM Festival: Portugal, now the MOOD Records label head Nicole Moudaber is gearing up to bring back her acclaimed MoodRAW event to Brooklyn on Saturday, November 10. Announcing a special solo opening set from the label boss herself ahead of one of her famed B3B’s with Dubfire and Paco Osuna alongside support from Japan’s top techno talent, Hito, fans will be thrilled to be able to catch more of the in demand DJ in her element. With this stellar lineup comprised of three of the leading stalwarts in the scene, this is one of the most highly-anticipated techno events for New Yorkers to land this year.

Presented by OUTPOST, the sought after event series MoodRAW brings the gritty sounds of techno back to the underground in large, cavernous warehouse spaces like The Great Hall at Avant Gardner. Back by popular demand, Moudaber is pleased to welcome her infamous B3B with two of techno’s most legendary DJ/producers for a rare performance. First making its three-headed debut at Ultra’s Resistance in Ibiza in September 2017, and again in 2018 at Ultra Music Festival in Miami, the B3B with Moudaber, SCI+TEC’s Dubfire, and Mindshake founder Paco Osuna, will make a return for what is sure to be one of the biggest sets to hit a Brooklyn dance floor alongside impeccable sound that the gargantuan venue is known for.

Hot on the heels of her recent ‘Adoption’ EP featuring two remixes for Moby on her own imprint MOOD Records released on October 5 worldwide, Moudaber has gone from strength to strength in 2018. Making her way through Central and South America with Ultra’s Resistance, the radio host touched down last weekend at the iconic festival in Panama, Ecuador and Colombia. Afterwards, the radio host will head to Amsterdam for Awakenings at Amsterdam Dance Event on October 18 before picking up her US tour again with EDC in Orlando on November 9, MoodRAW in New York on November 10 followed by stops in Boston, Chicago and Dallas. Nicole will also be hosting her very own Holy Mood event on Holy Ship!  setting sail January 5-9. Looking ahead, fans can look forward to the release of a ‘Best Of Mood 2018,’ a compilation mixed and compiled by Carlo Ruetz who recently played alongside Moudaber at her MoodZONE showcase at The BPM Festival: Portugal.

An event promoter, record label founder, radio host, and one of the most passionately followed DJ/producers in the world, Nicole Moudaber is a one-woman army marching her muscular take on techno all over the globe. Having played at the world's most revered nightclub institutions such as Berghain, DC10, fabric, OUTPUT, Space, and Stereo; to massive festival stages, including Awakenings, Coachella, Electric Daisy Carnival, Glastonbury, Movement, The BPM Festival, and Time Warp. Her weekly radio show ‘In The MOOD’ – is syndicated on over 80 FM stations in 50 countries, commanding over 20 million listeners worldwide.

On the philanthropic side, Moudaber recently launched her ELEVEN campaign which aims to end the brutal practice of female genital mutilation (FGM) worldwide. Those wanting to support the cause can do so by donating to her GoFundMe or by purchasing an ELEVEN charity bracelet available via her store and also for sale during MoodRAW in New York with 100% of all proceeds going to Magool, a not-for-profit dedicated to supporting survivors of FGM.