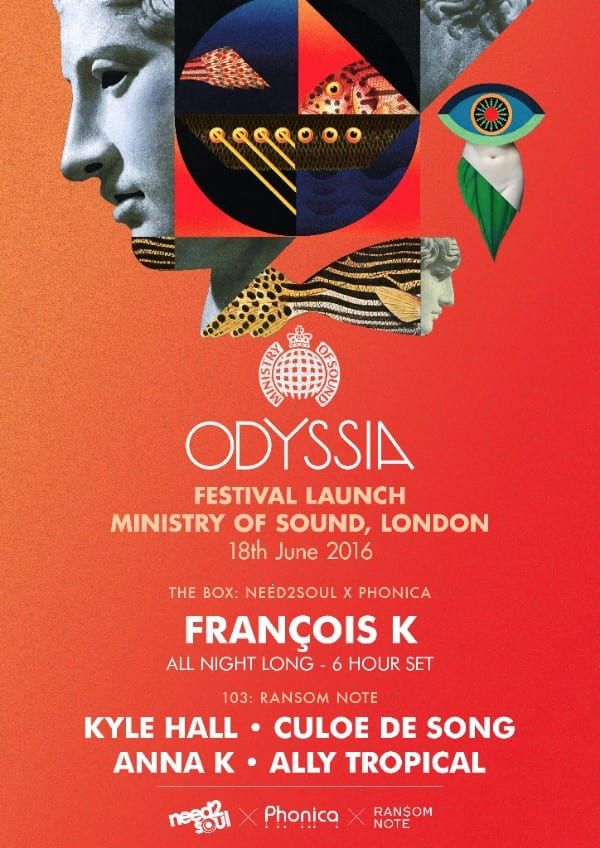 Ahead of the brand new Greek festival, Odyssia, London’s favourite superclub, Ministry of Sound will play host to the launch party for its debut on Saturday 18th June. Acts featured will include a very special six hour set from François K in The Box and also showcase a first class selection of DJs in room 103 – Kyle Hall, Culoe De Song, Anna K, Ally Tropical.

The institution will be welcoming a legend to The Box, as François K brings forth an all night long set indisputable to his nature. Reigning NYC since he moved in 1975, François K AKA François Kevorkian has become a seminal part of the electronic dance history, as a sole DJ and intrinsic to the Body & Soul trio. As part of the original American DJs to play at Ministry when it first opened, the club will mark his return perfectly suited for the occasion. Over in room 103, Kyle Hall takes the lead with a rich musical production. Joining him is Culoe de Song, internationally recognized for his infectious sounds and projects and known for his memorable appearances at Ministry in the past. Whilst Ally Tropical and Odyssia resident Anna K will also heat the bill.

Odyssia will proceed to launch its new festival at the Cariocas Beach in Greece on August 31st till September 4th, whilst Ministry will also celebrate it’s 25th birthday in September.