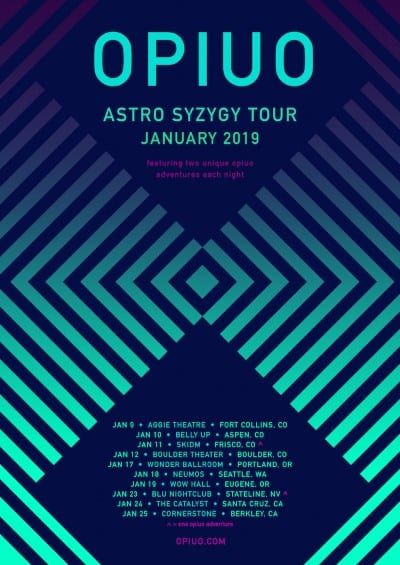 Diverse New Zealand based producer, Opiuo, will bring his synth-led funk sounds to the States this January, as part of his ‘Astro Syzygy’ tour, playing across 10-dates in 10 different locations.

The ‘Astro Syzygy’ tour finds Opiuo taking a new approach to to his show showcasing two completely different sets.  Attendees are sure to get their fill of addictive audible treats as well as a few surprises at every show.

Priding himself on his eclectic sounds, the tour follows the release of Opiuo’s ‘Live From Red Rocks’ album, which featured the recording of his first ever live orchestral show turning his funk laden jams into lush compositions.  Watch the video for Opiuo x Syzygy Orchestra ‘Live From Red Rocks Movement II’ here.

One of the pioneers of the funkadelic bass music and a true genius at putting out some of the loudest-yet-cleanest electronic music productions known to mankind, Opiuo continues to push the envelope and explore the depths of his musical creativity with his ‘Astro Syzygy’ tour kicking off on January 9th in Fort Collins.

Playing  further dates across Aspen, Frisco, Boulder, Portland, Seattle, Eugene, Stateline, and Santa Cruz, the Australia-based producer will round things off with a show at Cornerstone, Berkley, on January 25th.

Tickets for the tour are available here.

*One set only.
**After party for Sound Tribe Sector 9.