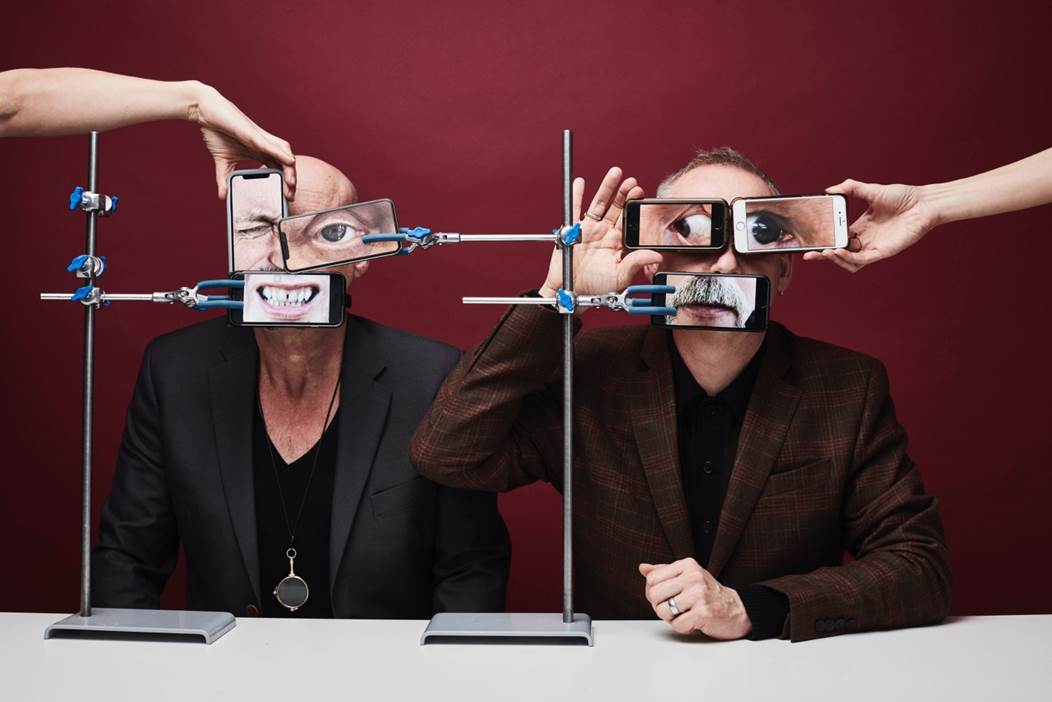 When monsters are loose in a darkening world, we need monsters of our own to fight back. After a barnstorming live reunion which saw them play to ecstatic audiences across Europe throughout 2017 Britain’s giants of electronic music Orbital announce they’re back for good – with new music and an upgrade of the legendary live show that transformed festivals across the world.

Reunited brothers Paul and Phil Hartnoll release their new single, ‘Tiny Foldable Cities’ on May 11. An intricate piece of electro-hypnotica in the lineage of ‘The Box’ or ‘Style’, it restates why Orbital were always a cut above the bargain basement boom-and-bosh crew, and takes their signature sound forward into a new and fascinating phase.

Their first new album in five years – the one even fans wondered if they’d ever hear -called ‘Monsters Exist’ is out September 14.

‘Monsters Exist’ is a more classically structured Orbital album than their previous release ‘Wonky’, drawing inspiration from the international political landscape all the way back from Paul and Phil’s pre-rave squat-punk roots right up to the volatile tensions and erratic rhetoric of today.

“When you haven’t made an album in five years it just comes tumbling out,” says Paul. “Because of the global situation I was torn between writing a really aggressive Crass-type album that says ‘Fuck The Man!’ or going back to rave sensibilities. You know, let’s really rebel by stepping away and actually living that alternative lifestyle.” But the idea of ‘Monsters Exist’ tied it all together.

Phil puts it more succinctly. “It’s a reflection on modern day monsters,” he says. “That can mean anything from bankers and The Man or your own demons and fears. The monsters inside you,” he says, evilly.

Among the tracks in progress is a cosmic piece featuring an address for the possible end of the world by Prof. Brian Cox (“It’s Brian being emo,” says Paul. “Brian Emo”). There’s also an epic state-of-the-planet title track featuring “anguish, dread and News at Ten-style drama.”

When they’re in balance these leading figures of British dance music constitute their own self-regulating yin and yang. Analytical, detail-oriented Paul listens to everything from new electronica by Nathan Fake and Jon Hopkins to Beck and Belle & Sebastian.” Born-again German techno fan Phil is hammering Bicep and the resurgent minimal sound of Berlin (he went to Berlin for the first time ever in 2017 “and I was like fucking hell, why haven’t I been here before?”). If time is a loop then Orbital have completed their own revolution to a new equilibrium.

“The master plan for this one,” says Paul, “is to make a bloody good album. And then see what happens.” ”

Orbital bring their groundbreaking live show to BBC Music’s Biggest Weekend in Belfast on May 25. Throughout 2018 they’ll play a string of high-profile festival dates and headline shows across Europe featuring new material alongside classics like ‘Chime’, ‘Belfast’ and ‘Impact’. (see full live dates below)

“We had an absolutely fantastic year with the live shows in 2017,” says Phil Hartnoll. “For instance we played the Blue Dot Festival at Jodrell Bank which was incredible, and for our London Christmas shows we really wanted to upgrade our whole production, which seemed to pay off judging by the amazing crowd reaction.  It all reminded us, yes, this is why we love doing this.”

Reconnecting with Orbital’s past, acclaimed avant-garde artist John Greenwood, who painted the famous bulbous and organic artwork for 1994’s ‘Snivilisation’ and 1996’s ‘In Sides’, will return to create the cover of ‘Monsters Exist’. Some 20 years after he first collaborated with Orbital, Greenwood’s shifting shapes and comical hybrid organisms – the Chapman Brothers meets Monsanto, or maybe Hieronymus Bosh-bosh-bosh – feel even more in sync with an era obsessed with its own genetic monsters. “We’ve always loved John’s work,” says Phil, “and it feels especially right for this record.”

This surge of creativity shows how the Hartnolls have rebuilt one of electronic music’s best-loved partnerships after Orbital’s surprisingly bitter break-up in 2012. Driven apart by music’s strange and infamous brother-vs-brother dynamic, Paul and Phil didn’t speak for five years after the ‘Wonky’ tour ended.

“When we fell out, I just couldn’t enjoy any of the amazing things we’d done over 25 years with Orbital,” says Phil. They’d been onstage with Stephen Hawking at the Paralympics, in front of the whole world. They’d remixed Madonna. They’d played Glastonbury many times and travelled the world. “And this silly row sort of poisoned it. How daft is that?”

Now the brothers have a pact. Whatever happens, Orbital does not stop. “We’ve learned to talk to each other rather than let things stew, and it’s much better,” says Phil. “We used to waste a lot of energy wondering what the other one was thinking and getting on each other’s nerves. But now we actually talk! And it’s brilliant.”

“It was silly really,” adds Paul. “We’re brothers and business partners and creative partners, so we were three times as likely to fall out. But in the end we had to remind ourselves that Orbital is something we’re really proud of and that we love doing it.”

It’s healthy, he thinks, to be reminded of how lucky you’ve been, of how you need each other, of how you’ve got to let each other play to their strengths. “If we were both the same,” says Paul, “then it wouldn’t be Orbital.”