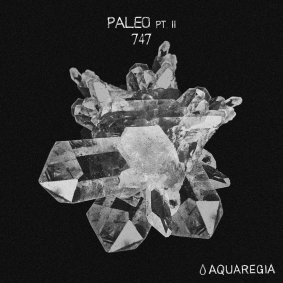 Paleo Part II is the second superb EP in a four part series that explores the geological past of our planet through acid. The artist behind the fascinating sounds is young Vancouver star 747, as it was behind Part I in October 2017.

Starting at the age of sixteen, 747 began experimenting with decks at his friend’s family’s nightclub and it quickly developed into a strong passion for electronic music. Intrigued by the world of synthesis and sound design “he became fascinated with a filter resonance’s delicate balance between flat and harsh,” and it is that which defines his innovative musical output.

Armed with a TB303 and FG204, 747 continues the backwards excursion here. Opener ‘Tethys’ has acid tides rolling over subaquatic drums. You can almost hear the cooling volcanic magma become a breeding ground for exotic crystals as icy hi hats and hunched drums surge on into new territory. It’s an organic track that is hypnotic and filled with optimism.

On the meditative ‘Pangea’ we whirl through a land of extremes as we’re taken across the wide open supercontinent from the ice-laden poles to the scorching centre. Celestial pads bring a sense of the divine as piques of acid and perfectly undulating synths extend all around us.

This EP is filled with perfectly deep techno that has an absorbing cinematic feel.