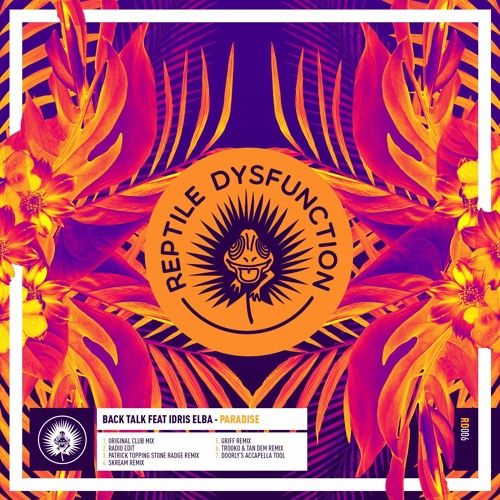 Doorly’s Reptile Dysfunction drops a huge house record from a brand new project accompanied by vocals from Idris Elba, with remixes from Patrick Topping, Skream and more completing what will surely be one of the biggest packages of the year.

Back Talk is a brand new collaborative electronic live band project consisting of core member producers and Reptile Dysfunction label mates Doorly, Trooko and Tan Dem. The band will also feature a constantly evolving cast of cameo featured artists and vocalists, the first of which is Idris Elba on their debut record ‘Paradise’.

Idris has been out there firmly rooting himself as a producer on the house scene with releases on his own 7 Wallace imprint. On this release he lends his voice to what can only be described as a heady house cut.

On ‘Paradise’ his unmistakable vocals linger over a sleazy house groove that develops into a psychedelic break typical of the kind of left-of-centre electronic music Reptile Dysfunction has been championing this year.

The first two remixes come from two of the biggest names in house and techno, Patrick Topping and Skream. The former twists the vocal and adds ominous bass thumps and searing synth stabs for a huge tech-edged thumper, while the latter producers a beautiful melodic version seeped in neon-flecked ambiance. Both are exemplary.

Further mixes come from label mainstay Griff who goes for a beach-ready, percussion-heavy house workout, and Trooko & Tan Dem who craft order from chaos with their high-energy cut.

A full-length Back Talk album will drop in early 2018 with some extremely exciting featured guests to be announced.