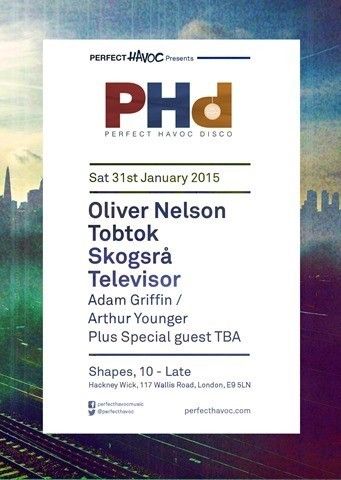 Four of electronic music’s youngest and most exciting new artists will join together for the Perfect Havoc Disco (PHd) New Year’s party in a rare showcase, revealing why their exquisite House and Nu Disco sounds have got labels worldwide lining up to sign their work – welcome to the stage, Oliver Nelson, Tobtok, Skogsrå and Televisor.

These artists have been cherry picked by the management agency Perfect Havoc and have created nothing short of a tidal wave in House and Nu Disco productions. From remix credits including The Magician, Route 94, Icona Pop and Ella Henderson; support from leading dance music magazines to multiple spins on Radio 1’s biggest dance shows, the productions of Perfect Havoc artists are causing a stir and they’ll be showcasing what all the hype is about at the January event.

First up is the seriously in-demand, Swedish producer Oliver Nelson. His rapid rise to success is in part due to his killer remixes on the brilliant My Love by Route 94 feat. Jess Glynne, the #1 hit Ghost by Ella Henderson, and the huge Habits by Tove Lo. DJ sets for the respected Kitsuné Maison have seen Oliver (and stablemate Tobtok) fine tune their DJ skills ready to be unleashed at PHd.

At just 22, fellow Swede Tobtok can also do no wrong when it comes to producing top notch Nu Disco. His single Higher was Zane Lowe’s Next Hype Record, played two consecutive weeks by Pete Tong, and was Hype Machine’s #1 Most Popular Track on Twitter. Tobtok’s remix credits include Out Of My Head for Zak Waters, Get Lost for Icona Pop, and on tune of the summer Sunlight for The Magician. It’s his forthcoming EP on Kitsuné that will get ears pricked up at PHd.

Another genuine breakthrough artist snapped up by Perfect Havoc is 21 year old Swedish producer Skogsrå. His debut single Now You See Me has been played over 500,000 times on Soundcloud, he’s remixed for Island Records’ priority band, Prides, and has played live in a four-piece band at Sweden’s longest running, five day festival, Emmaboda.

Finally on the Perfect Havoc roster is the Nu Disco / Indie Dance duo Televisor (Dutch & English!) who are making serious waves of their own. Their DJ credentials were underlined at Gala UTT in France where they played to a 3,500 strong crowd; and in the form of an exclusive DJ mix for the YouTube sharing channel, Mr Revillz. Production wise they’ve been releasing on Canadian indie label Monstercat and have gained interest from one of the USA’s biggest label’s, Big Beat / Atlantic Records, to remix Icona Pop’s new single.

Perfect Havoc Disco also sees DJ sets from label boss and ex-Sony Music marketer, Adam Griffin; another bright talent tipped by Perfect Havoc for success, Arthur Younger, whose production have been doing the rounds of some huge music blogs including Indie Shuffle and Dancing Astronaut; plus an appearance from a very special headline guest who is yet to be announced. Check out Adam’s DJ mix from the last PHd party – now clocking an impressive 40,000 Soundcloud plays – for a flavour of what’s in store:

There is no hype or fluff added when talking about how in demand these four artists are – there is a genuine buzz around them and their credentials speak for themselves. Come down to Perfect Havoc Disco at Shapes and see for yourself.