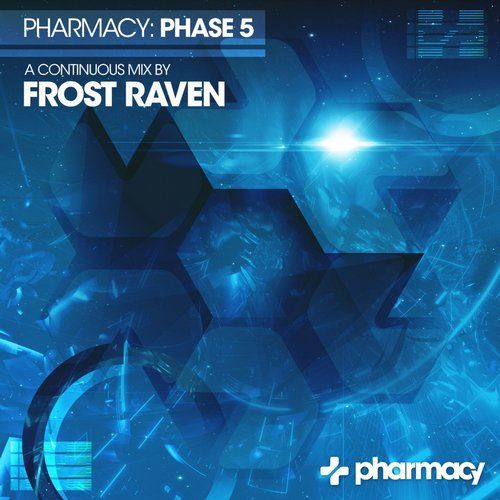 For the fifth installment of it’s acclaimed label series, Pharmacy heads to Northern California where Frost Raven, one it’s most prolific and straight up cool producers takes the helm. Frost Raven is a highly respected and diverse producer, working the spectrum from techno and progressive to psy trance. He is responsible for some of Pharmacy’s biggest tracks, including Becoming Different, Never Alone, The Beast and Nevermore which were championed by tastemakers such as Paul van Dyk, Jordan Suckley. John 00 Fleming, Markus Schulz, Indecent Noise, M.I.K.E, Alex MORPH, Airwave, Giuseppe Ottaviani and many more.

Pharmacy Music has been unstoppable over the past year. No matter where you go in the underground trance world, there it is – topping the Beatport charts, featured in DJs live sets, in the press, on the airwaves and with label boss Christopher Lawrence taking Pharmacy label nights on tour globally, the movement continues to spread at lightning pace. The word of mouth isn’t just good.. it’s bloody amazing! After years of plugging away and carefully developing a roster of talented artists, Pharmacy is now recognized as one of the world’s premiere underground labels and it’s showing no signs of slowing down. So much so that a new imprint, Pharmacy Plus, was recently launched which explores the hard trance and tech trance sides of underground trance.

Pharmacy: Phase 5 kicks off with the signature dark techno influenced sound of Frost Raven’s Becoming Different, then slides into the funky bass of Orpheus’s Heaven. Next up a hypnotic journey that leads to a mind bending, head twister of a breakdown in Microsis ‘s Anno Machina. Orpheus & Mirson turn it up a notch on First Light with clever production and tripped out sounds. The melodic sounds of Ikerya Project’s Magic Flute keep it beautiful and organic which leads into the dark yet lush hypnotic sounds of Acid Syndrome’s Common Man. Reaky’s Through The Cosmos In 7 Minutes is part techno, part psy trance but sophistication is the order of the day. Mark L steps in next to give Stephane Badey’s Pandora’s Box a dark psy trance re-work maintaining all the intensity but bringing it a whole new vibe. Daniel Lesden takes the helm with his lush and technically impressive remix of label boss Christopher Lawrence and Jonathan Allyn’s The Human Element. Orpheus’s classical training shines through on Sleepy Land with its’ beautiful piano and guitar work in the breakdown. Up next are two from Jen Jakobs; Rogue Planet and Dark Energy demonstrate his unique ability to create melodic hooks using uncommon sounds. 2Komplex’s Available Information is proper trance at its best with a powerful groove for the body and an epic journey for the mind. Jens Jakob & Diego Morrill team up for Titan which is a beast of a track with a discordantly beautiful melody. The mix wraps up with back to back versions of Orbiteck’s The Wicked Rabbit Movement. The Original Mix is a tough edged slice of underground mayhem while Seven & Haze’s remix turn up the intensity, combining old school hard house hoovers with new school trance.

Release Dates:
Pharmacy: Phase 5 is out exclusively on Beatport on June 1st
http://pro.beatport.com/release/pharmacy-phase-5/1536439