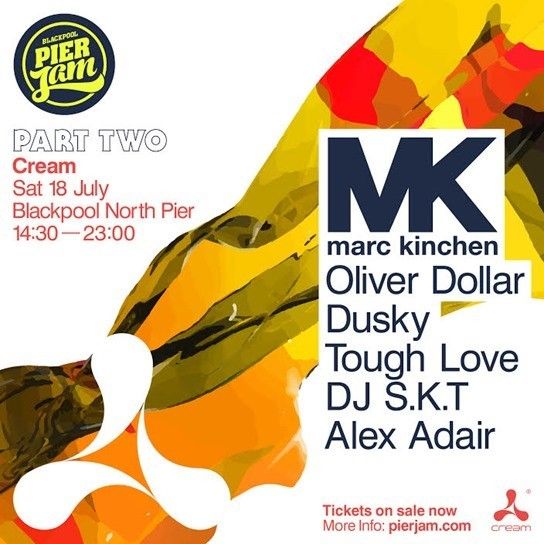 Pier Jam & Cream have announced the second in their series of all-day summer parties, taking place in the sunshine on Blackpool Pier. On Saturday 18 July house legend, MK takes centre stage with other headliners such as Oliver Dollar, Dusky, Tough Love, DJ SKT and Alex Adair ensuring that Pier Jam continues on its mission to deliver the best all day parties for real house music fans this summer. With 2 outdoor and 2 indoor arenas, 3500 clubbers will enjoy cutting edge dance music from 2.30pm until 11pm, while soaking up the sea air and sunshine vibes. Tickets start at just £20 + BF in advance (www.pierjam.com). Look out for Pier Jam to shortly announce further additions to the DJ lineup, as well as a third Pier Jam event!

Pier Jam will deliver a very special summertime atmosphere. Dancing all day to the best house music, then watching the sun go down over the sea, will be a clubbing memory that’s hard to beat. The first Pier Jam event has already sold out the early bird allocation, so expect Pier Jam Part 2 to prove more than popular.

From the acts confirmed so far….main stage headliner, MK needs little introduction; responsible for creating some of the defining sounds and biggest tracks of early house, he is now influencing a new generation with his unique, stripped back style – expect a massive set from him.

The other headliners announced by Pier Jam represent some of the best talent in dance music today. Berlin’s Oliver Dollar has been building a fearsome rep as both DJ and producer, delivering quality funked up house grooves. Like MK, he is one of the few producers to have enjoyed commercial success while maintaining his dancefloor credibility. Dusky will step up with their eclectic approach to house music guaranteed to deliver a unique set to seriously move any crowd. In just a few short years, they have established themselves as leaders of the UK underground and Pier Jam clubbers will find out why.

Tough Love know how to deliver a hook. The London duo saw their anthem ‘So Freakin’ Tight’ picked up by Island Records earlier this year. It flew up the charts and remains one of the biggest tracks around. Expect 90’s influenced vibes and hands in the air at Pier Jam. DJ S.K.T is one of the fastest rising names in dance music, tying together deep and soulful house with garage, experimental bass and more.  The pier will be rocking! Also announced today is Alex Adair. The 22 year old, UK DJ / producer, fresh from producing one of the biggest recent house tracks, ‘Make Me Feel Better’ is lining up a set of melodic house gems specially for the Pier Jam crowds.

If you want to jam this summer, head for Pier Jam! For the latest news on all Pier Jam events sign up online at www.pierjam.com