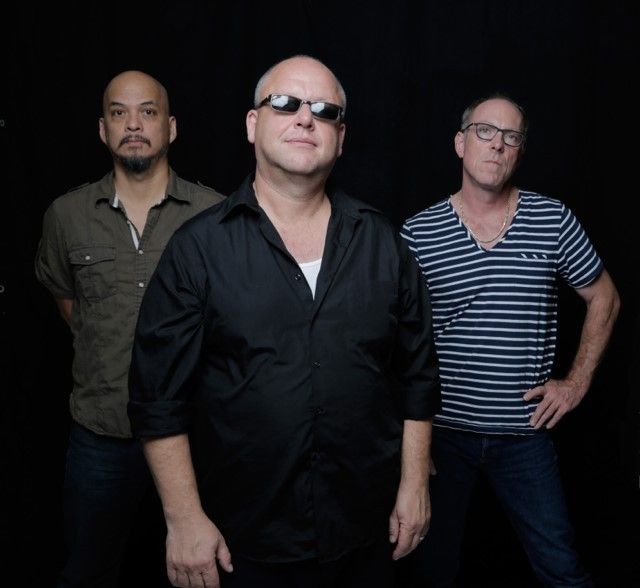 Following the successes of the track “Bagboy” and the four-track “EP-1,” Pixies deliver again, rolling out “EP-2,” four more brand new songs – “Blue-Eyed Hexe,” “Magdalena,” “Greens and Blues” and “Snakes,” as well as a music video for “Blue-Eyed Hexe.”
The new songs were recorded during October 2012 at Rockfield Studios in Wales, UK, were produced by Gil Norton, and written by the Pixies.  As with the band’s “EP-1” and “Bagboy” track, as well as the Pixies original classic albums, “EP-2” features special artwork designed by Vaughan Oliver at v23.  “EP-2” is available exclusively on the band’s website – pixiesmusic.com – as a DDL (mp3 only), lossless DDL, limited edition 10-inch vinyl, and as part of special bundles.  The “Blue-Eyed Hexe” music video can be viewed here.  Log onto the band’s website for more details.

Pixies will continue their extensive world tour in 2014, kicking off on January 15 with a 33-city North American trek, followed by a series of major South American and European festivals in the Spring and Summer.  The festival appearances will include headline slots at Lollapalooza Chile, Lollapalooza Argentina, and Lollapalooza Brazil in April, as well as at London’s “Field Day” in early June.  All dates are below.

Pixies talk about the four new songs on “EP-2”

“Blue-Eyed Hexe”
About this track, Pixies’ Black Francis explained, “It’s a tale from the northwestern part of the UK, and it’s a witch-woman kind of a song.  That’s what a ‘hexe’ is, and ours is a blue-eyed hexe.”  Guitarist Joey Santiago added, “Gil wanted a swagger, he wanted the guitar solo to sound like you’re going to have sex with this blue-eyed hexe.”

“Magdalena”
“This song is so atmospheric,” remembered Santiago.  “We had these weird Moog pedals that sounded like water.  It was a very mood-based, atmospheric sound, not based on any lyrics or anything.”  Added drummer David Lovering, “One of my favorites, maybe tied with ‘Indie Cindy.’  It’s cool the way it flows, and it’s a very simplistic song, very pretty, cool and moving.”

“Greens and Blues”
Said Black Francis, “As with all my songs, I would prefer people add their own interpretation to it.  But, in this case, let’s just say that we had done ‘Gigantic’ as the closer for many years at our reunion shows and it worked really well.  But I could see that we were going to grow weary of that and I felt like we basically needed a better ‘Gigantic.’  It was my attempt to come up with another song that would – musically, emotionally and psychologically – sit in the same place that ‘Gigantic’ has sat.  Not that I could ever replace that song: you write songs and they come out the way they come out.  So perhaps it can be said that this song fills the emotional niche that ‘Gigantic’ occupied, another show-closer.  I think the lyric alludes to that, the fact that it’s the end of the night, the end of something. And a separation if you will, between the band and the audience.  So I guess it’s kind of a goodbye song, or really more of a ‘good night’ song.

“Snakes”
“I’m not a jammer,” said Santiago, “but Black Francis and I started jamming it out.  I had this little idea and I did that sliding guitar just to emulate a snake.”  Black Francis adds, “This one was totally written in the studio session.  It proved to be a little bit difficult to play and a little bit difficult to record, sonically, but we stuck with it and I like the result.“
With many more dates to be announced, the confirmed Pixies 2014 itinerary is as follows: