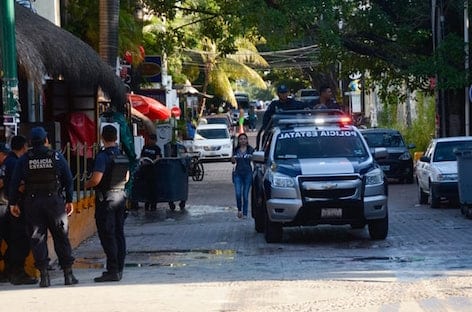 Playa Del Carmen's mayor has canceled all future electronic festivals after the shooting at BPM Festival, including the upcoming Arena Festival.

A gunman opened fire at the Blue Parrot nightclub around 3 AM on Monday, January 16th, at the BPM closing party in Playa Del Carmen. Four people, including two security workers, were shot dead, and another women died in the stampede to leave the club.

In a press conference on Monday, Mayor Cristina Torres Gómez explained that these kinds of events are no longer welcome in Playa Del Carmen, and that this would be the last BPM Festival to take place there. She also mentioned that the upcoming Arena Festival, which was due to take place in February, would not be allowed to go forward. "We want these types of events to go," Torres Gómez said. "We won't allow one more."

A number of major publications have speculated that the violence is tied to conflicts between drug cartels and festival organizers. Playa Del Carmen is a wealthy region full of upscale tourism and nightlife, making for a robust local drug market. One promoter from the area told Reuters that "armed men who claimed to be part of a drug cartel turned up recently at one of his parties, demanding access to sell drugs." He explained that various narco groups are in conflict for control of the region, meaning that all large electronic events in the state now run a similar risk.

Local blogs also posted a photo today of a message spray-painted on a blanket and hung in Playa Del Carmen, which allegedly has one drug cartel claiming responsibility for the violence. It reads: "This is a demonstration that we are here, and it was because you didn't get in line, Phillip [from] BPM"—Phillip Pulitano is the Canadian co-founder of the festival. "This is the beginning, and we're going to start cutting off heads of [rival drug cartels]." The veracity of the images and their connection to the altercation has not been confirmed by major news sources.

THANKS TO RA FOR THIS STORY.