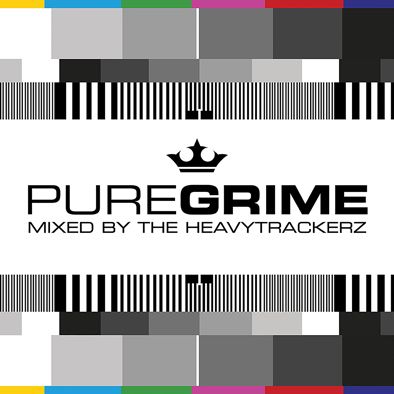 The last 2 years have seen the emergence of a new wave of Grime artists, now led by Stormzy debuting with 'Not That Deep' and Meridian Dan's cult hit 'German Whip.' These artists have one thing in common; The HeavyTrackerz produced their breakthrough singles. Following their success, the production trio of Teedot, G Tank and RasEye have become in demand, working with the biggest names in the game Wiley, Dizzee Rascal, Giggs and the entire scene for their all-star anthem 'TRKRZ' featuring Stormzy and Big Narstie among many others.

The Grime takeover is in full effect, and has now fully infiltrated the mainstream. Many of the artists featured on Pure Grime are now some of the biggest names in UK music with Dizzee Rascal, Skepta, Lethal Bizzle, Craig David, Big Narstie, Wiley, Stormzy and JME.

Pure Grime – mixed by The HeavyTrackerz is a 2CD, 50 track album and THE definitive Grime collection for 2016.

2015 saw the emergence of a wave of new Grime artists, Stormzy debuting with 'Not That Deep', Bonkaz with 'We Run The Block' and who could forget Meridian Dan's cult hit 'German Whip.'

All of these artists have one thing in common, they've all had their breakthrough singles produced by The Heavytrackerz, launching their careers and also responsible for kickstarting the grime resurgence through their productions.

Following their breakthrough success, the trio of Teedot, G Tank and RasEye went on to work with Wiley ("Chasing The Art'), Dizzee, Giggs ("Nutcrackerz") and the entire scene for their all-star anthem 'TRKRZ'.

An endorsement from AKAI Pro's for their collaboration with Section Boyz on 'Say It Ain't That' is proof of The Heaytrackerz growing profile as the hottest producers in grime.

The Heavytrackerz have also been the most in demand remixers from the scene, their remix featuring Kano helping Izzy Bizu to be nominated for the Brits Critic's Choice award and BBC Sound Oof 2016. The Heavytrackerz capped off another successful year by teaming up with Stormzy once again on ŒStandard'.

For 2016, The Heavytrackerz will be focussing on their new Rinse FM show, Grime festival stages, setting up their own label and also building their album through a release of The Heavytrackerz artist singles, which will be more vocal lead opposed to MCS with the ambition to tour a live grime show.