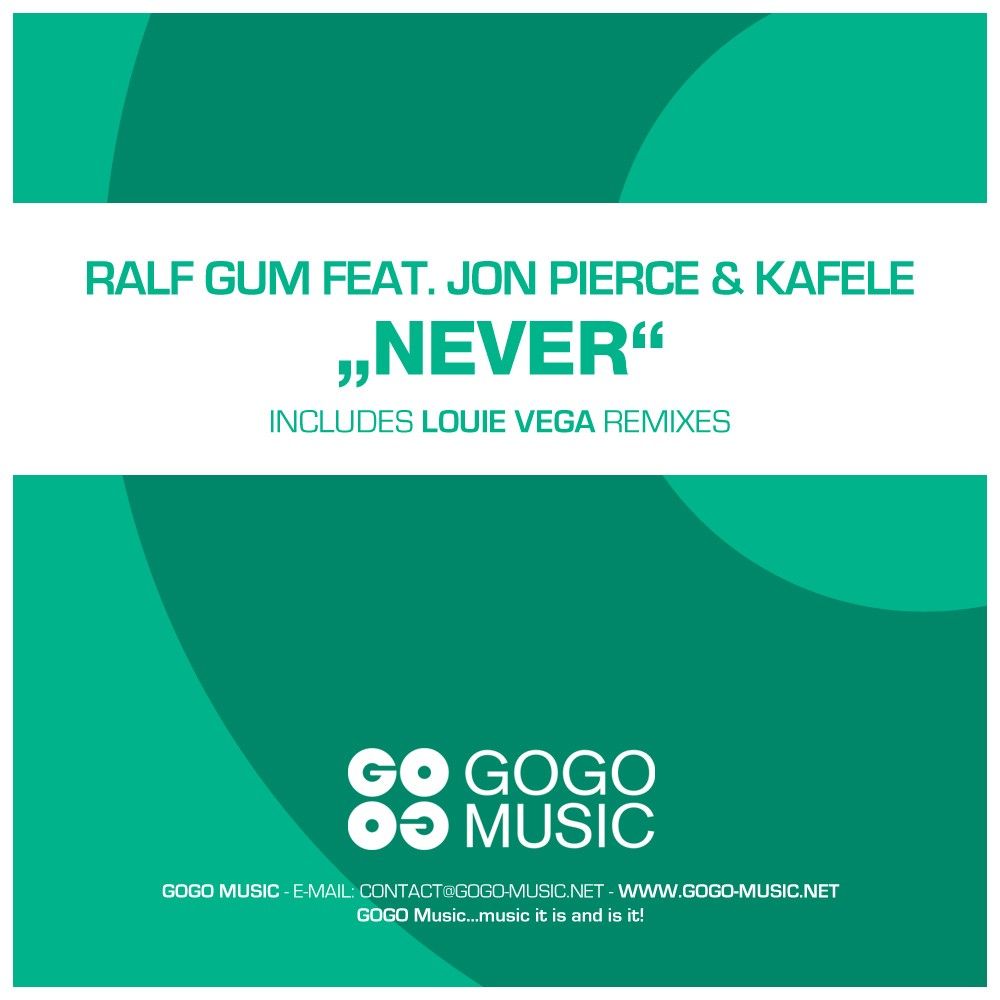 GOGO Music keeps at it with this stunning and real heartfelt song titled ‘Never’, which gave Ralf GUM’s album ‘Never Leaves You’ its name. Featuring Chicagoan crooner Jon Pierce and Kafele on trumpet and background vocals, the song received much praise since the long-player was released.  Finally it receives its single release with remixes by no one less than the legendary Louie Vega.

Ralf GUM is arguably one of the hottest names in the deep and soulful house music scene. Through years of consistent production and outstanding DJ performances, Ralf has earned his place as a visionary of the music scene and is renowned for his unique production talents which are classic, compelling and have blazed through the World’s musical consciousness. After the release of his critically acclaimed debut Album ‘Uniting Music’ in 2008 which gave birth to classics such as ‘Kissing Strangers’ and ‘All this love for you’, a second album with the same gravitation pull to satisfy the high expectations of his followers was always going to be a tough act to pull off for this multi-talented musician and DJ. And yet Ralf GUM continues to defy his critics – ‘Never Leaves You’, his second Album was released in September 2012 and reached the top spot in the charts of download and physical record stores, including a Gold Award in South Africa.

A native of the South Side of Chicago, Jon Pierce realized his deep love and sheer passion for music at just the impressionable age of 11. Having been exposed early on to such musical genius as Stevie Wonder, Maze featuring Frankie Beverly and Luther Vandross, it is the soulfulness of these and many other influences that helped him to shape his full-energy sound, which is filled with a hint of jazz. With his unique style and creativity Jon delivers lasting impressions that have not only made him a permanent fixture in Chicago’s diverse soul and theatre scenes, but have catapulted him globally with tours and performances throughout Germany and the UK. ‘Never’ is a true testament to Jon’s vocal capabilities and the authenticity of his unique sound.

To our joy Kafele lately becomes a kind of regular on GOGO Music’s releases. Now for the 5th time on the label, the great Jazz and Soul musician appends his unmistakable trumpet play to the song and as well can be heard on the background vocals together with Eliki. Right after his release with Sir LSG and Brian Temba, he once more proves his relevance as one of the sought after musicians in the House scene.

Remix honours for this single release come from Grammy award winner Louie Vega. Vega really shaped House Music as we know it like probably no other person. Whether as one half of the highly acclaimed ‘Masters At Work’, with his ‘Nuyorican Soul’ project, under one of his many monikers, as a solo artist or with his band ‘Elements Of Life’, he delivered countless and timeless blueprints of how the genre has to sound. When we approached Louie for a remix of one of Ralf’s album titles, he chose ‘Never’, which is in his own words is ‘simply a beautiful song’. He and his EOL musicians converted Ralf’s smooth broken beat production into an uplifting and monumental House affair, with that typical Vega touch so many others tried to copy, but only he can deliver.