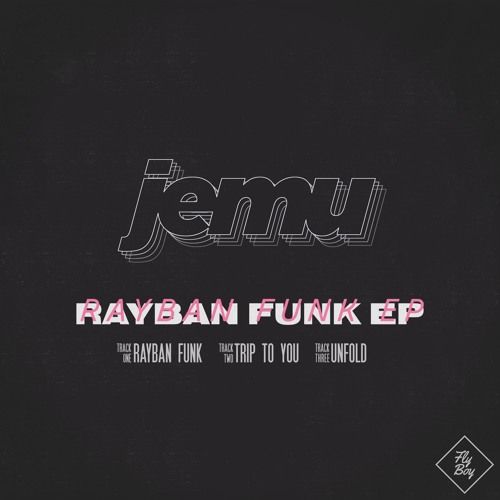 With the lead track premiering on Complex UK this week, Fly Boy Records can now reveal the debut EP from new signing Jemu. 'Rayban Funk' EP is out now.

The EP takes us on a journey through bold low-end, grooving, dusty drum tracks and emotive chord patterns. Through the music we are introduced to hints of Jemu’s inspiration taken from a broad range of styles and artists like LTJ Bukem, DJ Premier and Jazzanova.

On the EP, Jemu says 'For me, the real fun in writing music is coming up with chord progressions and melodies; the tempo doesn’t matter as long as the musical elements create the feeling that I’m trying to achieve through the music. I have a real love for Hip Hop, R&B and Soul, so with this EP I’ve been experimenting with sound pallets and chord progressions reminiscent of those styles, but in a slightly different context.'

From the gritty drums of 'Rayban Funk', the laid back R&B vocal chops of 'Trip To You'to the leftfield lead lines of 'Unfold', this debut EP from Jemu is a flawless blend of lo-fi, soulful soundscapes.

Initially trying his hand at music production on his father’s copy of Dance Ejay 3, a loop-arranging software, he was later introduced to Fruity Loops by a friend, which opened the door to a much more creative approach to making music.

Inspired by the eclectic music tastes of his family and his own explorations into Hip Hop and Liquid Drum & Bass, Jemu has developed a natural ear for emotive chords and rhythms.

What started as a hobby has developed into a life-long obsession, practicing piano and production techniques daily with the goal of being able to create music without being constrained by lack of musical or technical freedom.