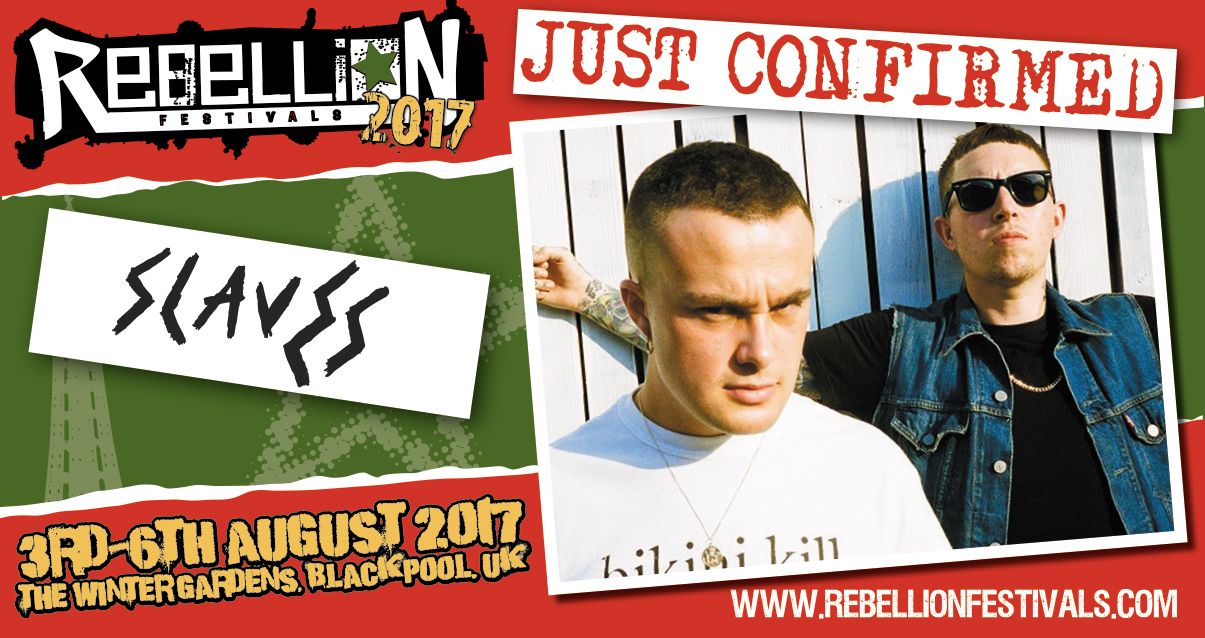 2016 saw the now legendary punk event Rebellion Festival celebrate its 20th year alongside the 40th anniversary of punk with a spectacular sold-out event. Over four days at Blackpool’s Winter Gardens, iconic bands from every aspect of punk across the world shared stages with new and emerging talent as the likes of The Descendents, The Damned, Buzzcocks, Stiff Little Fingers, Dag Nasty and many more showed that, despite what Malcolm McLaren’s memorabilia burning son might say, punk is certainly not dead and is kicking back harder than ever.

Rebellion Festival is set to return in 2017 from the 3rd to the 6th of August and the line-up is already shaping up to be another punk genre defining event. The latest act to join the festival are Kent duo Slaves, a band that are absolutely the sound of new punk in 2016, dragging it by its scruffy neck to the present and into the future.

“'Four years ago I was watching Rancid headline rebellion and Slaves hadn't even played a festival yet,” states guitarist Laurie Vincent. “Now to be back but to headline it ourselves is beyond our wildest dreams. Can't wait to see you there!”

This highly regarded duo will headline the Empress Ballroom on the Friday night and join a line-up that already includes such luminaries as The Skids, Sham 69, Angelic Upstarts, The Vapors, UK Subs, DOA, Poison Idea, Alternative TV, Neville Staples Band and many many more.

Day tickets are now available at £60 per day and there is also the opportunity to buy weekend tickets in instalments with a deposit.

More bands, running-order and stage times still to be announced.

Rebellion Festival is an ALL AGES, family friendly event and children under 12 are admitted free of charge (accompanied by an adult). More information and tickets are available at: