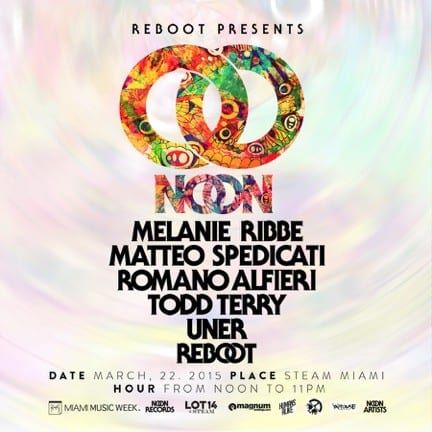 Reboot, also known as Frank Heinrich and whose name has become synonymous with the phrase “the new sound of Frankfurt,” has gained enormous respect among industry peers and fans alike, as he draws from diverse musical influences. As a producer his approach borrows liberally from across the musical spectrum from jazz to world music to classic house. In 2014, alongside business partner Carol M. Sepulveda, Reboot launched his very own Noon Records, a platform hosting a roster of exceptional talents who embody the sound, which Reboot is passionate about and wants to share.

Joining Noon Records label members will also be industry heavy-weights Uner and Todd Terry. Uner, who has become one of the most important names of the new generation of Spanish electronic music producers has landed himself on renowned labels, including  Diynamic, Cadenza and Visionquest. In addition, Grammy Award nominated DJ/Producer and InHouse Records label boss, Todd Terry has become one of the world’s most celebrated figures in dance music. Mark Sunday, March 22 on your calendars because there could not be a more exciting way to start off your Miami Music Week than in the sun, enjoying the quality music of Noon Records at Reboot Presents: Noon Showcase.