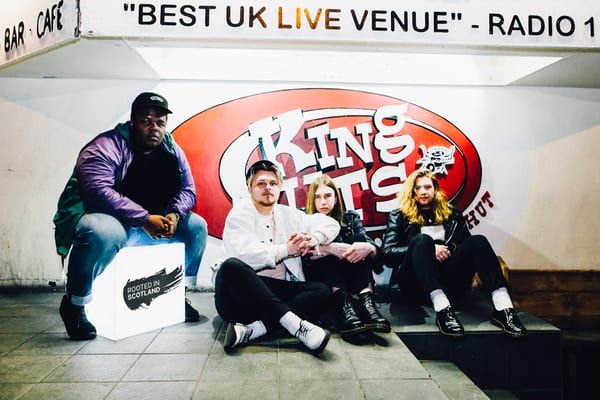 A truly momentous performance from Idlewild marked the official launch of Help Musicians Scotland in Glasgow last night, as the iconic Scottish band played to a sold-out crowd, ten years since they last graced the King Tut’s stage.

The UK’s leading independent music charity officially launched permanent roots in Scotland at the ROOTED IN SCOTLAND event which was packed with loyal music fans excited about a mix of home-grown talent. HM Scotland, announced a host of pledges for Scotland’s music industry as well as future plans for 2018, including their expanding team with the exciting appointment of Sharon Stephen as Scottish Music Industry Liaison.

Help Musicians UK Chief Executive Richard Robinson laid out a series of pledges as part of the ROOTED IN SCOTLAND launch. Joined on stage by Claire Gevaux, Director of HM Scotland, the charity announced their support of the professional development within the sector with bursaries to Scottish music industry conference Wide Days in April.

Idlewild’s set followed an incredible trio of performances from Scottish artists Be Charlotte, Indigo Velvet and SKJØR; all of whom have been supported by Help Musicians in the past. The up and coming bands have received support in a number of ways from the charity, including taking part in Ignite, a programme supported by Help Musicians and run by the Scottish Music Centre to give a platform to up and coming bands, topping up crowd funding campaigns and invitations to showcase gigs, only proving how essential HM Scotland will be to the country’s young musicians.

Indigo Velvet addressed the packed crowd, saying: "Thanks so much to Help Musicians for having us and for all the help they've provided our band. Their support is imperative to musicians and we're buzzing to see them launch in Scotland tonight!"

Playing a bespoke acoustic set, Idlewild delighted fans by belting out their much-loved tunes during their performance with fans singing along, excited to witness the intimate show in the iconic venue.

The official ROOTED IN SCOTLAND launch was at the heart of the series of events taking place across Scotland this week. Cities including Edinburgh, Dundee, Dumfries and Perth hosted various fundraising events demonstrating the connectivity of the Scottish music industry.

A full list of the HM Scotland pledges announced last night are included below:

As an independent charity, the charity relies on public support through donations, volunteering and fundraising which is crucial now, more than ever due to the ever increasing need and demand for our life-changing services and programmes.  Through this generous backing the charity is enabled to carry out its vision, of a world where music thrives.

Today, HM Scotland is calling on the Scottish public to help it achieve its pledges to the Scottish music industry and is auctioning some amazing items and experiences, kindly donated to us by supporters of #RootedInScotland. From a guitar signed by the Scottish heroes Biffy Clyro, to tickets to sold-out shows, there’s something for every music lover out there. The full list can be found at www.helpmusicians.org.uk