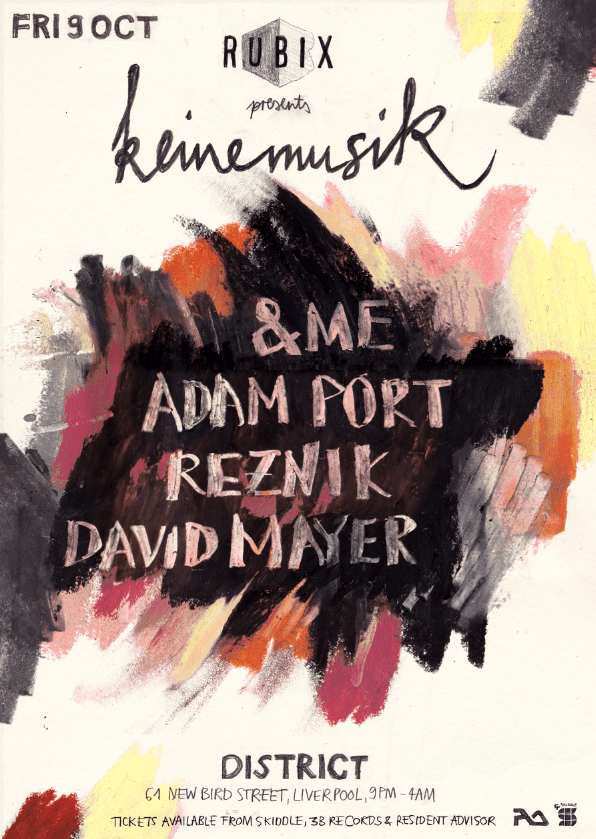 The promise of Rubix has been confirmed for a while now, with the Liverpool clubnight quickly becoming one of the best in the city. Underground house and techno is the name of their game, with previous appearances from heavyweights such as Technasia, Sebastian Leger, Martin Buttrich and Stacey Pullen added to a growing reputation for bringing in new talent for debuts.

That push forward for offering a new dimension to the Liverpool scene continues in October, as they bring Berlin based DJ collective and record label Keinemusik to the city for the first time, encasing them in Baltic quarter venue District. Based in Berlin’s legendary Stattbad Wedding club, the imprint has been pushing out off kilter house and techno grooves since 2009, with the free spirited values of the party spreading across the globe.

The production output sees each one of the imprint’s five talismans knocking out a single track a year to rave reviews, with plenty of the electronic music media heralding the crew.
Four of those five will make their way to Liverpool, with the label’s talisman &Me joined by Adam Port, Reznik and David Mayer to offer a full snapshot of what the group represents musically.

Their respective careers mark production credits on stellar imprints such as Dirtybird and Kompakt, whilst their upcoming showcases at the likes of Croatia’s Sonus Festival, Montreal’s Stereobar and a clutch of events at Amsterdam’s ADE. The Liverpool date is undoubtedly in good company. Support on the night will come from the Rubix residents.