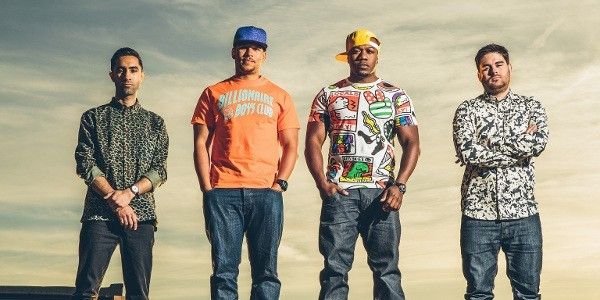 Following the release of no.1 album ‘Home’ and no.1 single ‘Waiting All Night’, Rudimental return with ‘Right Here’.  This new, summer-drenched single is set for release on August 12th via Asylum Records.  The accompanying video was shot at the Tiger Temple (aka Wat Pha Luang Ta Bua), a Theravada Buddhist temple in western Thailand, and is directed by Josh Cole who also shot the ‘Not Giving In’video (which won him the Best New Director at the Cannes Lions Advertising Festival).

Featuring reverb-laden steel pans, signature Hammond organs and the luscious vocals of fellow Brit newcomer Foxes, whose collaboration with Zedd ‘Clarity’ is currently racing up the Billboard Hot 100 in the US. ‘Right Here’ is next instalment from the band’s critically acclaimed album – Home.

Already accumulating the highest first week sales of any debut in 2013, ‘Home’ looks set to be one of the ‘albums of the year’.  The collection of genre defying songs was in April to critical praise and includes the chart-topping ‘Waiting All Night’ and ‘Feel The Love’ alongside the tastemaker favourites ‘Hell Could Freeze’, ‘Baby’ and ‘Spoons’.

Rudimental (Piers Aggett, Amir Amor, Kesi Dryden and Leon Rolle) have continued to win rapturous responses for their live shows. Their exhilarating sold out gig at The Electric in Brixton last month saw the four core members painting vibrant scenes from a varied pallet, joined by live brass and percussion.   This unique sound clash of live instruments, soul, reggae, garage, house and drum ’n’ bass is proving a winning formula at all their live shows. The Rudimental collective includes a wealth of musicians and singers who rotate on stage for their moment in the spotlight.

Rudimental’s summer run has already started – kicking off with a special Finsbury Park gig alongside Dizzee Rascal and Stone  Roses and a 30,000 strong crowd at Parklife in Manchester.   This continues with UK festival appearances at Glastonbury (this past weekend), Latitude, Global Gathering, Bestival and V Festival.  In October, the band will take their carnival-esque live show on the road for their second UK headline tour.  Kicking off in Leeds, they will then play Newcastle (SOLD OUT), Bristol (SOLD OUT), Bournemouth (SOLD OUT), and Birmingham. They round of the dates at London’s prestigious Brixton Academy.