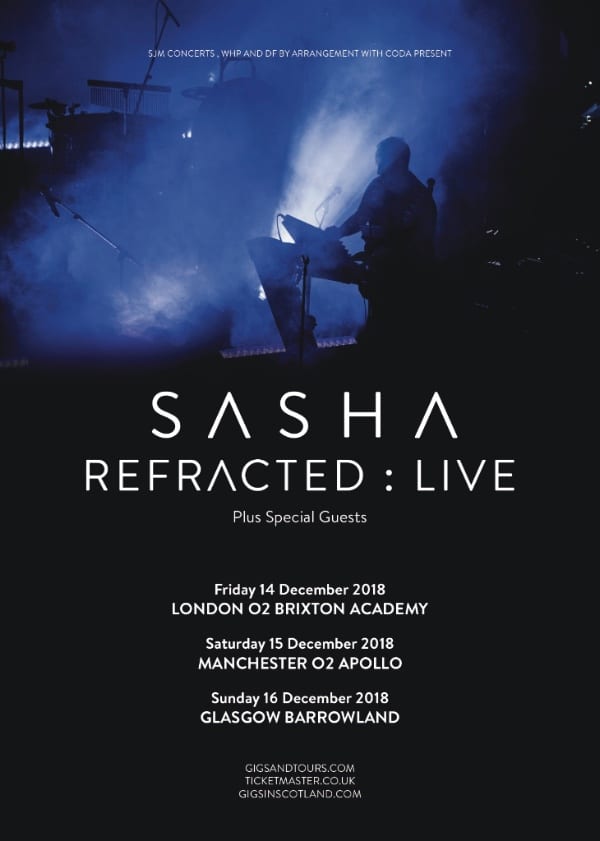 Sasha announces a new tranche of dates and venues for his sell-out sensation REFRACTED:LIVE show this December, with a debut performance in Glasgow.

The tour starts Friday 14th December at Brixton Academy, followed by Manchester’s Apollo on Saturday 15th and Barrowland, Glasgow on Sunday 16th December. Tickets go on sale on Friday 1st June, and as the last two tours sold out in record time, fans are recommended to get clicking asap.

This iteration builds the excitement even higher than before. Increasingly inspired by REFRACTED:LIVE’s success so far, and the new lease of creative life the live show has given him, the producer, label head and Grammy nominee has been hard at work in the studio. Attendees can expect to hear new music Sasha has composed specifically with a live setting in mind.

‘Since the last live gigs at the Roundhouse and Bridgewater Hall we have been busy in the studio writing new music for this next round of shows’ Sasha says. ‘Collectively, we have been so inspired by the fact we get to play our music live, it has pushed us creatively in a whole new direction. We have been working on new material that will fit into what to us is a whole new environment. It's so exciting that after so many years on the road I now have a whole new way of approaching music. I can’t wait to share some of these new ideas with you!’

The show evolves with each mini-tour. Fans can expect surprise guests and vocalists as well as significant new material, yet to be revealed. REFRACTED:LIVE is an electronic show performed live by Sasha on piano and electronics, alongside an 8-piece string section, a percussionist and guest vocalists and musicians, as well as his core production team (long-time collaborators Charlie May, Dennis White and Dave Gardner) on keyboards and drums, combining new tracks with classic releases re-imagined as an original score for live performance, providing an enthralling immersive experience.

Tickets for REFRACTED:LIVE will be available at on Friday 1st June: