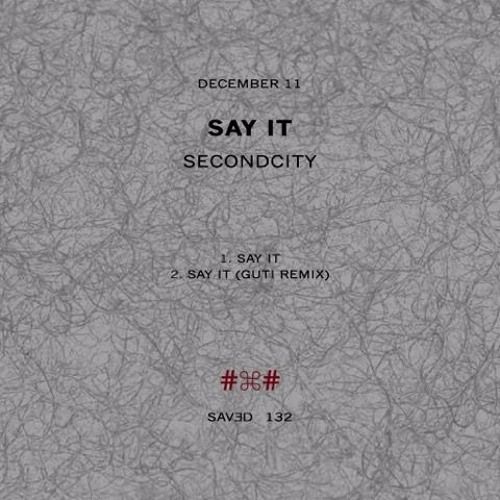 Following on from his huge UK no. 1 success with ‘I Wanna Feel’ in 2014, Secondcity has since prevailed to tap deeper into his house and techno roots, securing himself well within the underground scene. Now he’s back with his ‘Say It’ EP out now on Nic Fanciulli’s iconic imprint Saved Records and his production abilities couldn’t be more refined.

No stranger to the label, Secondcity has amassed an impressive back catalogue on Saved Records, as well as other credible platforms such as Suara, Toolroom & Lapus Music. As well as this, he has remixed tracks for the likes of Carl Cox, Medo & Mihalis Safras, alongside an extensive touring schedule that has seen him play all across the US, Canada & Europe. Not forgetting his close relationship with Antz & La Famillia – representing them at global music events such as ADE – and his infamous Ibiza residency at Sankeys this summer.

Say It begins with a dark, pulsating tribal beat, muffled as if heard from the outside of a club in the intro. A satisfying bass groove underpins the characteristic percussive elements whilst the eponymous vocal sample teases in and out, whilst a climactic build up and drop towards the end of the track makes this perfect for peak time dance floor moments.

Guti’s remix on the b-side takes a different, drawn-out approach; a dark, echoey wandering intro proves an atmospheric way to set the scene for the powerful bouncing house beat that kicks in once the track hits its stride. The original’s percussion ripples in and out, whilst the vocal is altered to a shadowy whisper.

Secondcity’s ‘Say It’ EP proves a refined addition to the Saved Records catalogue.

For more information on Secondcity, see below: