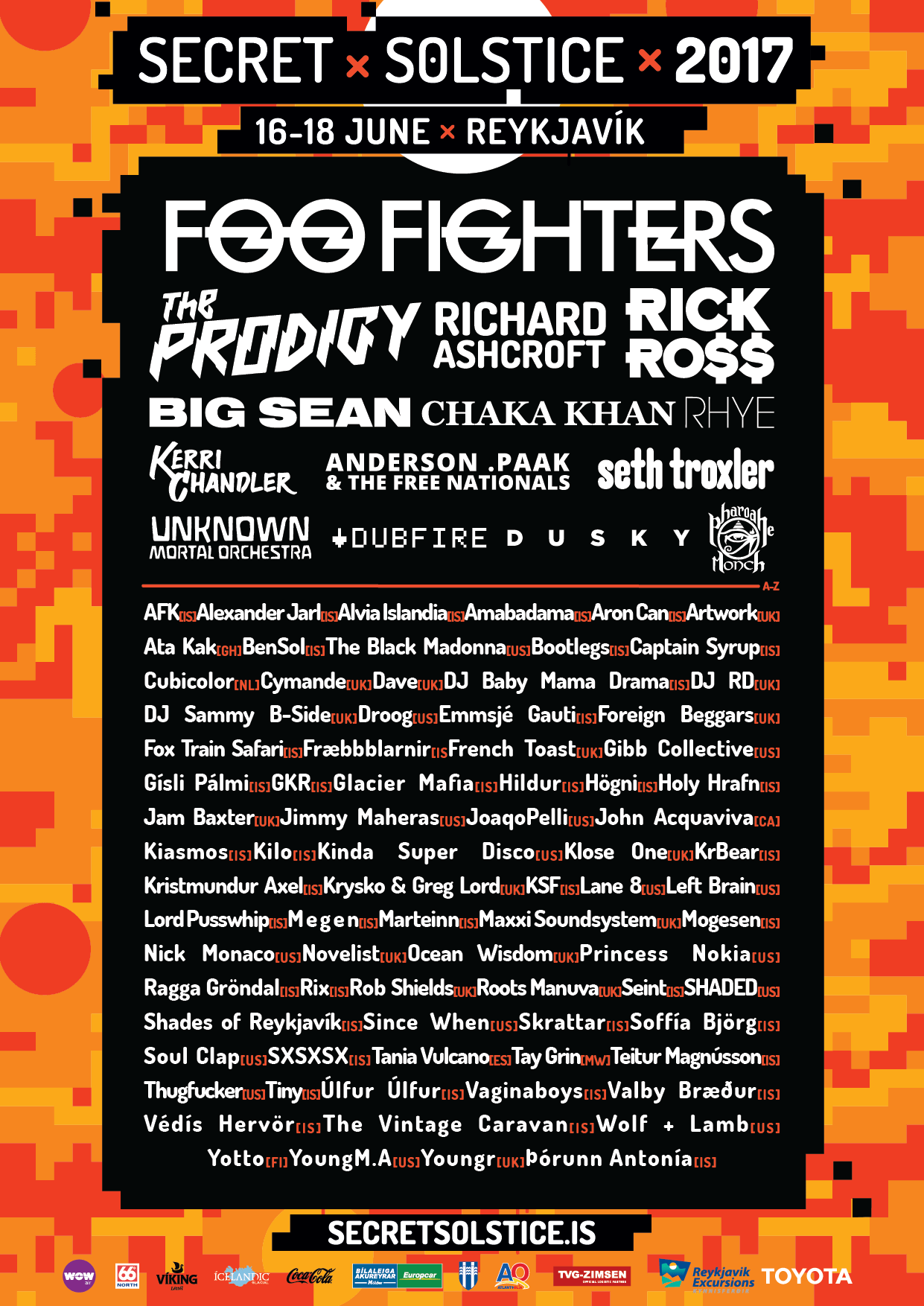 Featuring unending daylight provided by the never-setting summer solstice sun, side events including the world’s only party inside a glacier, as well as some of the planet’s biggest names in music, Iceland’s Secret Solstice festival already feels like the summer event of 2017.

Situated in the world’s most northerly capital city of Reykjavík, and happening at a time when the sun never fully sets, the event has just announced their second phase line-up, adding to their already revealed names including Foo Fighters, The Prodigy, Richard Ashcroft, Dubfire, and many more.

Dance lovers are also in for a celebration, new names flying to Iceland from abroad include Seth Troxler, The Black Madonna, Lane 8, and Cubicolor being added to previous names like Dubfire, Kerri Chandler, Soul Clap, Wolf + Lamb, Dusky, as well as Iceland’s own kings of electronica, Kiasmos.

On the local front, the Icelandic contingent of artists has been bolstered, featuring rockers The Vintage Caravan, the island’s biggest name in rap Gísli Pálmi, and other local names including Ragga Gröndal, Vaginaboys, Valby Bræður, and more.

And finally, with an estimated 20 million album sales, and known globally for immense hits including “Ain’t Nobody” and “I’m Every Woman”, Queen Of Funk Chaka Khan has also been added to Secret Solstice’s 2017 lineup.

Secret Solstice’s incredible side events are now also on sale to people travelling  to the Icelandic music festival, with only 180 tickets in total available to their Midnight Sun Boat Party available for 14,900kr (approx. £111/€130/$138), and only 125 tickets to each of the event’s Secret Solstice presents Into The Glacier parties on sale at 49,900kr (approx. £373/€437/$463) while they last.

Secret Solstice has also just announced heavily-discounted package deals in partnership with their airline partner WOW air, including flights, accommodation, and festival passes bundled together with massive discounts off booking individually.  Available until limited numbers are sold out, buyers can use the code “wowairhotel” for 20% off hotel packages, and “wowaircamp” for 25% off camping packages. Destinations from Europe include London, Paris, Amsterdam, Barcelona, Dublin, Bristol, Frankfurt and many more.

Tickets to Secret Solstice's fourth edition are on sale now via official ticketing partners Tix.is and Eventbrite from 21,900kr (approx £164 / $192 / €203) for a full 3-day event pass, with accommodation and ticket packages available HERE

Secret Solstice’s full 2017 lineup as it stands can be found below, including all newly-announced names: