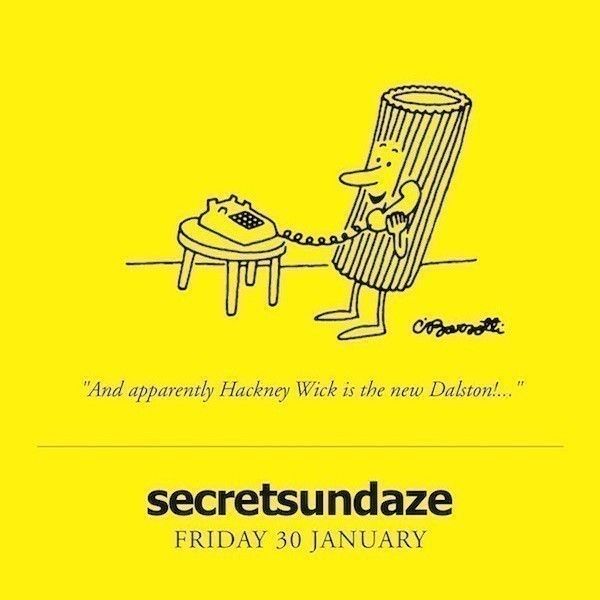 On Friday 30th January secretsundaze throw their second party of 2015 at BLOC (previously known as Autumn street studios) the fantastic gem of a venue in the heart of Hackney Wick.

January can be a slow month in the clubbing calendar in the capital after the Christmas and NY celebrations but secretsundaze have no doubt that come the end of the month people will be itching for their dose of real house and techno.

BLOC with a capacity of just 550 is the smallest venue that secretsundaze will have thrown a party at for some years, but with it being the beginning of the year it felt like the perfect time to do a more intimate cosy party in great space with killer sound.

Headlining the party is one of 2014’s brightest stars Ryan Elliott one of the esteemed residents of Panorama Bar / Berghain. He is the only resident that is entrusted with playing at both Berghain and Panorama Bar, which speaks volumes about his DJing skills. Hot off the press Resident Advisor’s end of year polls have announced only yesterday that his mix compilation for Ostgut Ton has been named as ‘Best Official Mix’. He firmly sees himself as a DJ but his releases are getting better and better with some killer 12’s for Ostgut and remixes for the likes of Mr Tophat and Art Alfie being in many DJs record bags in 2014.

secretsundaze have always dug a little bit deeper with their bookings and place emphasis on bringing new names into the fold, so they are excited to welcome Bristol based artist Shanti Celeste to London for her secretsundaze debut. Of Chilean decent, Bristol based Shanti works at the respected Idle Hands record store in Stokes Croft and hosts a monthly show on NTS. Her first few releases on BRSTL, Idle Hands and most recently a stellar EP on Julio Bashmore’s Broadwalk records caught the ear of secretsundaze residents Giles Smith and James Priestley. With influences from her native Bristol combining with more housey flavours from both Chicago and Detroit, we are looking forward to hearing what she has in store for secretsundaze.

Of course two of London’s finest DJs and residents Giles Smith and James Priestley will be warming up and closing the party as only they know how.