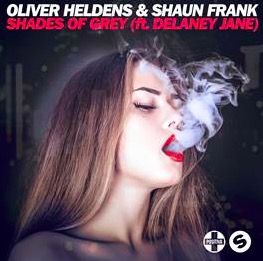 Oliver Heldens, already one of the world’s most in-demand producers following the release of debut UK #1 single ‘Gecko (Overdrive)’ in 2014, has joined forces with rising Canadian artist Shaun Frank on new single ‘Shades Of Grey’ featuring Delaney Jane, now available to pre-order and stream on Spotify and Apple Music.

Scheduled for release via Positiva on 23rd October, ‘Shades Of Grey’ again exhibits Heldens as a new breed of dance music superstar, tapping into the deep, bass-heavy brand of house music that has transformed the global electronic landscape over the past 12 months. Having also scored a further two UK Top 5 singles in ‘Koala’ and his remix of Dr Kucho! & Gregor Salto’s ‘Can’t Stop Playing’, Heldens has played a key, trailblazing role in this transformation, while Shaun Frank continues to impress after remixes for Steve Aoki and Kiesza.

The single itself is thoroughly infectious – from the bubbling groove of the intro through to Jane’s bittersweet vocal hook – with blistering, metallic synth lines also nodding to Heldens & Frank’s willingness to incorporate elements of classic electro. Full of the right kind of energy for the dance floor, ‘Shades Of Grey’ has already made it’s impact felt at festivals the world over after Heldens’ premiered it at Ultra back in March and the record has already earned the support of Tiesto, Martin Garrix and R3hab.

Given it’s strong start and considerable momentum, expect ‘Shades Of Grey’ to finish the summer as one of 2015’s most talked-about crossover records.