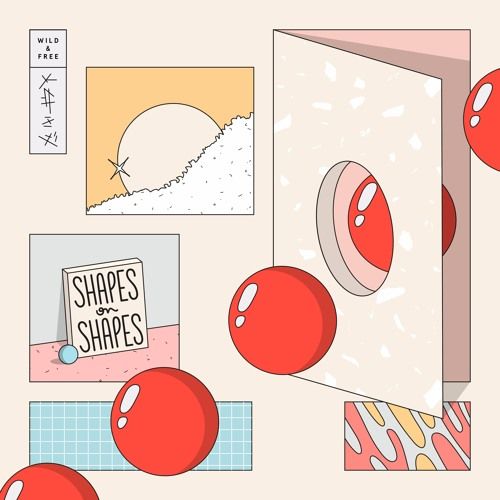 ‘Shapes On Shapes’ is the much anticipated debut album from LA based duo Wild & Free. Released this November on Portugal’s Discotexas, ‘Shapes On Shapes’ sees Drew Kramer and George Cochrane deliver on the promise of their early releases with 11 tracks of languorous poolside disco, tropical pop and Balearic house.

Wild & Free’s debut album “Shapes on Shapes” is a terrific example of what happens when you start with a million ideas, lovingly capture them all, and then treat the result like a block of marble. You chip away and chip away until only the perfect form remains, and you wonder, “How did we get here from there?”

Both multi-instrumentalists, singers and producers in their own right, the pair came together in 2015 and have spent the past 2 years crafting a series of acclaimed EPs and remixes (for the likes of Panama, Gigamesh, RAC and Ben Browning of Cut/Copy) that saw them tipped by the likes of Spin, XLR8R, Indie Shuffle and many more and take their live show on the road playing alongside the likes of Brooklyn’s Body Language.

Listening to ‘Shapes on Shapes’ it’s clear that the band named themselves well, throughout the record there’s a looseness and sense of spontaneity that few studio based (or perhaps caged) acts can pull off. A relaxed, almost casual, feel that ironically often only comes when you’ve put in the long hours honing your craft.

From the album’s opener and title track, an intoxicating haze of ambient synths, dreamlike vocal samples and reverb drenched guitar licks, its clear Drew and George have stretched themselves to fully embrace the possibilities of the album format.

Whether it’s the sun kissed pop of ‘River of Nilé’ and ‘Moment’, the exotic heady disco of ‘Tropique’ and ‘Ferns and Stuff’ or the dub inflected ‘Hiding Behind the Sun’, ‘Shapes On Shapes’ is one of the most joyous, life affirming albums you’ll hear this year.

Wild & Free is Los Angeles based duo composed of producers, vocalists, and multi-instrumentalists Drew Kramer and George Cochrane. These two ooze music from every ounce of their being. Their first single "Tropique" was released in 2015, and Spin Magazine described it as filled with "fat bass lines, tropical-tinged percussion and universally agreeable party sentiments."  In 2016, they opened for indie-tronica stars Classixx at Mixmag's "The Lab Los Angeles."  Their music has appeared on the MTV reality show Real World, Vampire Diaries and they’ve even worked on original music for Disney.  When they aren’t producing their own music, Wild & Free have also produced remixes for a number or high-profile artists including Panama for Future Classic, Moullinex, Gigamesh, Ben Browning of Cut Copy, Karl Kling of RAC, and David Marston of Soul Clap Records.