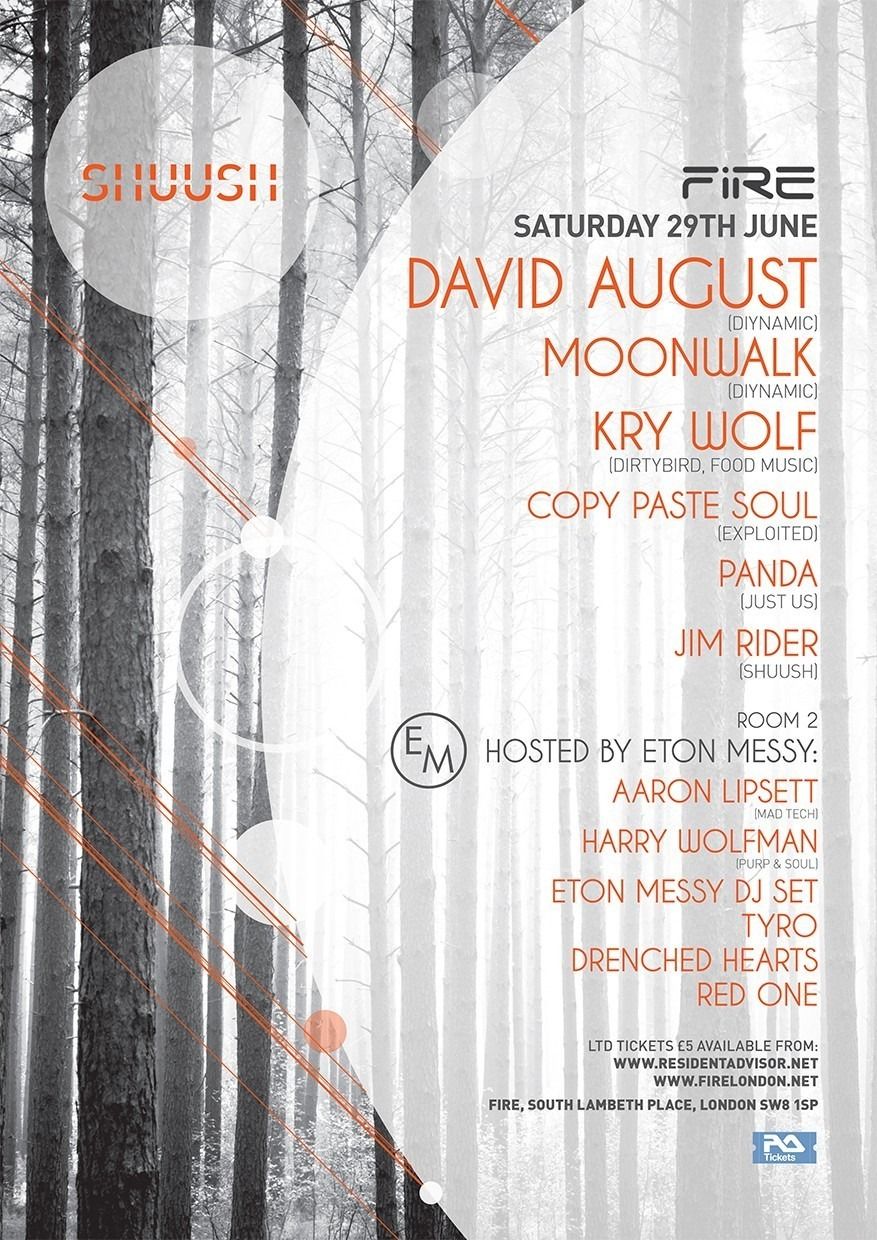 Following three roadblock shows, Shuush return with their biggest and most exciting line-up yet. Across two rooms, covering all things deep, tech and disco with a sprinkling of future garage.

Headline duty falls to man-of-the- moment David August, the Diynamic favourite who over the past 12 months has become one of Solomun’s label linchpins. With his recently released debut artist album ‘Times’ under his belt and this being his first London gig since road blocking Fabric back in March.. we are seriously excited about him doing his thing at Fire.

Main support comes from his label mates, Italian duo Moonwalk. Best known and loved for their enticingly warm melodic synths and emotive deep sound brought to the global floors on tracks like ‘Girl For You’, and ‘Things You Will Need’.

Next up we have a two of the most exciting house producer/dj talents all making serious moves on the scene. Leading the charge are the pair behind the Sumo label and Shadow Child’s Food Music Kry Wolf, joined by the hotly tipped Copy Paste Soul who’s ‘Look At Me’ EP on Exploited has been supported by everyone from; Skream, and Disclosure, to Modeselektor and Ben Westbeech.
Completing the line-up are residents Jim Rider, and Panda, on the dawn of a new release on MadTech.

Bringing something very special in Room2, with a takeover from Bristol’s Eton Messy.. the tastemaker YouTube channel which has become THE best place to discover new music. They are smashing it across the UK, and have recently sold out a show at Motion in their home town. They are joined by Purp & Soul’s Harry Wolfman, Mad Tech favourite Aaron Lipset, plus Tyro, Drenched Hearts, & Red One

If you want to keep the party going (let’s face it, why wouldn’t you). Everyone who attends gets a discounted wristband for Dawn After-Hours at Lightbox.