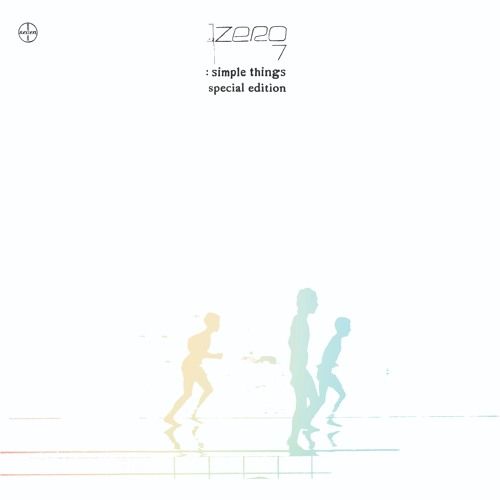 Originally released in 2001, ‘Simple Things sold over a million copies worldwide and was nominated for the Mercury Prize. Featuring Sia as vocalist on two tracks, the album was a slow-burning success, spending 89 weeks on the UK album chart, peaking at No.28 and eventually reaching platinum (300k) status. Stateside, the album hit no.4 on the Billboard Dance / Electronic album chart and stayed on that chart for 52 weeks.

This double CD special edition of ‘Simple Things mirrors the now unavailable original CD & an extra disc of 11 tracks. Many of the tracks on disc 2 have never been made available before – including 3 live sessions from the bands 2002 USA tour from San Francisco radio station KFOG (‘Simple Things, ‘Destiny & ‘Waiting Line), and 2 tracks originally only on the Japanese version of the album (‘Spinning & ‘Monday Night). CD2 also contains Zero 7s favourite remixes of the ‘Simple Things singles, from remixers including Photek, Richard Dorfmeister, and Idjut Boys plus an unreleased remix by Matthew Herbert. Singles taken from the original album included ‘I Have Seen featuring Mozez, ‘Destiny featuring Sia & Sophie Barker, ‘In the Waiting Line featuring Sophie Barker and ‘Distractions featuring Sia.

‘Simple Things is already an acknowledged classic, and with an extra 11 tracks it becomes an essential album purchase for any fan both old and new.

Zero 7 were formed in 1997 by Henry Binns and Sam Hardaker, who at the time were studio engineers at Londons renowned RAK Studios. After releasing a series of acclaimed remixes by artists including Radiohead and Terry Callier, they released their debut EP in 1999. Three further Zero 7 albums followed ‘Simple Things, including 2006s ‘The Garden, which again featured vocals Sia on guest vocals and also included vocals by José González, who they continue to work with. The album was nominated for a Grammy for Best Electronic/Dance Album.

Over the past few years theyve released EP's and various tracks on their own label, Make Records, and plan to follow latest single ‘Mono with more new material set for release early next year.