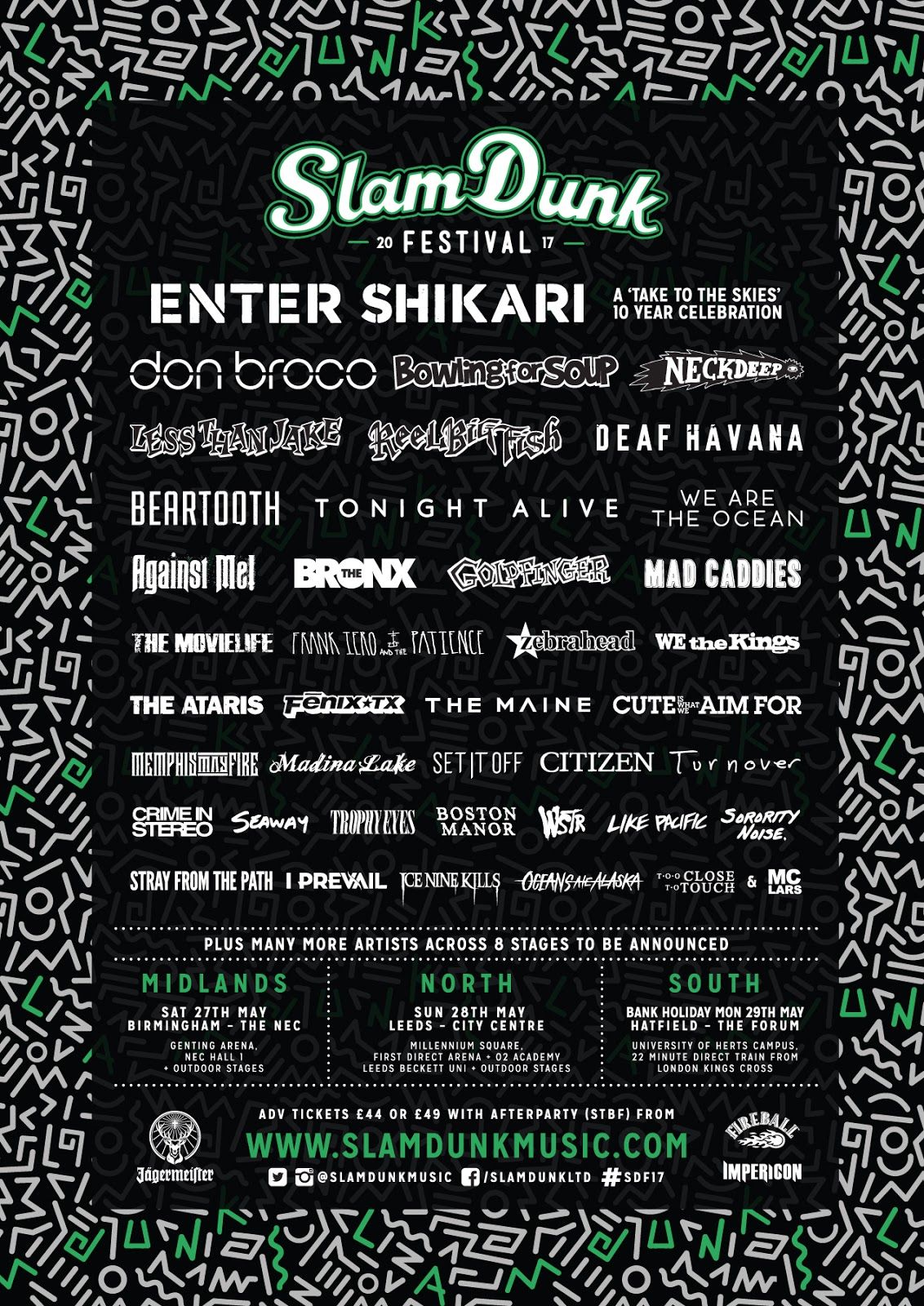 Following the monumental news last week that Madina Lake are reforming to play Slam Dunk Festival 2017 to mark their 10th anniversary, we are pumped to reveal a whole host of new acts joining the bill.

Added to the already stellar line up are alt-rock stars Deaf Havana, punk powerhouse Frank Iero and the Patience and rock favourites We Are The Ocean, in addition to The Maine, Crime in Stereo, Sorority Noise, Too Close To Touch, WSTR, Seaway, Boston Manor and Stray From The Path.

The last few years have been busy for Deaf Havana, having supported Bruce Springsteen and broken into the UK Top 10. But 2017 is set to be even bigger, as in January they released their fourth studio album ‘All These Countless Nights’, announced their much anticipated international tour, and are now revealed to play Slam Dunk Festival 2017!

Formed by the former guitarist for My Chemical Romance, Frank Iero and the Patience is a punk rock band taking the world by storm, having toured with the likes of the Used, Taking Back Sunday and Mallory Knox. With a handful of UK dates this month, they return this summer for their Slam Dunk Festival debut.

We Are The Ocean’s performance at Slam Dunk Festival 2017 will be bittersweet, given the emotional news that they will be calling it quits this year. But we are over the moon that their last ever shows will be with us, as they are a firm Slam Dunk favourite, and have played the festival more times than any other band. Hold tight, it’s going to be an emotional rollercoaster but a fitting last hurrah.

Arizona’s heartthrobs The Maine also join the line-up, and will no doubt bring with them new material from their upcoming album Lovely, Little, Lonely set to drop in April this year.
The Maine’s John O’Callaghan says:

"The British aren't necessarily known for their basketball prowess, but they are known for their domination over rock n roll. Which is why we can't wait to score a homerun and shoot a touchdown at Slam Dunk with this gnarly lineup.”

Also announced today are Crime in Stereo, Long Island’s answer to hardcore punk, Connecticut's Sorority Noise who will bring their anthemic brand of emo to the festival, and Too Close To Touch – whose solid blend of pop and post-hardcore will get crowds going.

UK pop-punk new bloods WSTR will join Canadian heavyweights Seaway and homegrown front-runners Boston Manor in one of the most highly-anticipated appearances this summer. Bringing the heavy, Long Island metalcore titans Stray From The Path will also be appearing across the weekend.

On their return to the festival, Henry Cox of Boston Manor says:
"We're really looking forward to playing this year’s Slam Dunk. The festival last year was a real highlight for us. This year is going to be more sweaty and more intense.”

A nationwide invitation to party in the name of the alternative, Slam Dunk Festival is rite of passage for lovers of pop-punk and rock music and is a key date in the festival calendar. Kicking off in Birmingham on May 27th, the festival will travel to Leeds on May 28th before finishing up in Hatfield on May 29th, once again ensuring the Slam Dunk Bank Holiday Weekend is the only place to be to catch all your favourite bands.

Slam Dunk is set to get even bigger and better in 2017 with the addition of the First Direct Arena in Leeds as the second stage, a second outdoor stage in Hatfield and an expanded site in Birmingham, ensuring more die-hard fans can savour the Slam Dunk experience than ever before. With tickets on sale now, and still more acts to be announced, Slam Dunk Festival is set to define 2017 with the ultimate alternative party of the summer.