Snowbombing 2014 goes out with a bang! 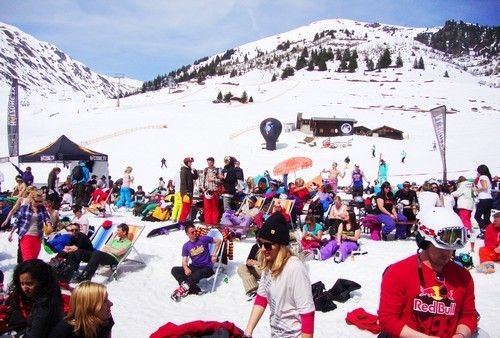 Snowbombing 2014 goes out with a bang!

Snowbombing celebrated its 15th birthday in style as 2014 went out with a bang! British electronic music pioneers, The Prodigy, were one of this year’s most hotly anticipated performances at the world’s greatest show on snow, Snowbombing. Their headline show in an alpine forest, certainly didn’t fail to deliver as they closed the five-day festival in front of an eager crowd who were delighted to hear all their classics including “Firestarter” and “Breathe.”

Other acts playing out the final moments of this year’s ski and music extravaganza were Carl Cox, who returned for a second year to tear the roof off the Racket Club B2B with Nic Fancuilli and Jaguar Skills who warmed up a lively crowd in the forest before The Prodigy.

Over 6,000 people were present at the festival throughout the week enjoying piste by day and beats by night. Thursday night saw The Chemical Brothers (DJ Set) play an incredible set at the Racket Club, which pulled in one of the week’s biggest crowds as well as Rudimental (DJ Set) who turned up the heat on the Monday night bringing the whole band, putting a live spin on their set.

A selection of other snowy shenanigans provided festivalgoers with entertainment throughout the week, including a workout session with the one and only Mr. Motivator, ski lessons with Eddie the Eagle Edwards and a Leder-hoe-down inspired street party with the likes of Austrian Filter Haus, Dub Pistols and Krafty Kuts Vs A Skillz.

The coldest rave in the world (in an igloo made entirely of ice), the Superdry Arctic Disco hosted the likes of Rudimental (DJ Set) and Carl Cox who warmed raver’s cockles with a funk and soul. This year’s Backcountry Party, an alpine lodge deep in the mountains, sold out every night and saw the likes of PBR Street Gang and Snowmbombing favourites Austrian Filter Haus rock the mountains. Wunderbar!

Other highlights were the Honda Snow Park Terrace in the mountains which saw Skream and Artwork compete in the legendary annual disco battle as well as a Digital Soundboy takeover and Mat Playford’s ‘Moog and a Piano’ set that saw hundreds of Snowbombers take to the dancefloor on the powder in the sunshine while pro-boarders showed off their skills at the Ride & Seek contest.

Other highlights of the festival included Groove Armada, Chase & Status and Sub Focus at the Racket Club and Four Tet B2B with James Zabiela who set the stage alight at the Forest Party.

With sell out parties, fabulous spring sunshine and fresh white snow, Snowbombing 2014 might just qualify as the best year yet. Organisers are already plotting to make 2015 an even more outstanding experience!

To catch up on the daily video highlights visit: https://www.youtube.com/user/snowbombing