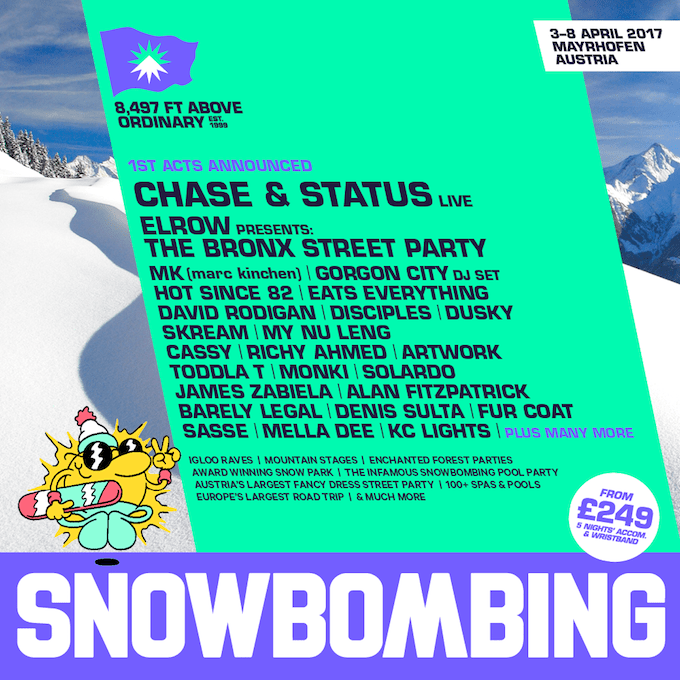 Snowbombing unveils the first wave acts set to perform at Snowbombing 2017! The world’s greatest live acts and DJs, including Chase and Status, MK, Gorgon City, Hot Since 82, Eats Everything and Dusky are set to descend on the most unique festival setting imaginable as Snowbombing demonstrates once again why it’s the world’s No.1 festival on snow. With igloo raves, forest parties, luxurious spas, snow-yoga, roof-top hot tubs, paragliding and even snow limos, not to mention 650km of unadulterated piste at one of the finest ski resorts in the Alps, Snowbombing 2017 promises to be the most ambitious event to date.

Chase & Status are set to bring their acclaimed live show to Snowbombing 2017! There’s not many acts who can count Rihanna, Snoop Dogg, Nile Rogers and Pharrell Williams amongst their biggest fans, but the British duo have risen to become the UK’s most in-demand producers. In a career which has spanned more than a decade, they have sold out arenas the world over and collaborated with the likes of Novelist, Slaves, George the Poet, Bonkaz and Plan B. With a fourth studio album about to drop and a rumoured collaboration with Craig David on the cards, their show at Snowbombing is set to be unmissable!

The annual Snowbombing Street Party brings the entire village of Mayrhofen together with party revellers for Austria's largest fancy dress street party. This year, following an incredible season of events at Space Ibiza, Spain’s wildest and most flamboyant party purveyors Elrow are set to deliver a generous helping of Elrow magic to proceedings with Elrow presents: The Bronx Street Party. Expect the spectacular as Mayrhofen is transported to the iconic, cultural melting pot of ‘El Bronx’ at the heart of New York, home to Mafioso, Hip hop, Break Dance and Graffiti.

An internationally respected name in the worlds of R&B, Pop and Dance, Detroit producer MK first forged his career in the 90s, producing some of the decade’s most recognisable grooves. A prolific producer, he’s worked alongside chart-topping acts like Will Smith, Pitbull and Jay Z, remixed the likes of Lana Del Rey, Sam Smith and Haim and topped the UK charts with his remix of Storm Queen's 'Look Right Through’. In 2015 he destroyed the Snowbombing Arctic Disco with his distinctive vocal-chop sound and is sure to raise the roof once again as he makes his return to the mountains.

With multiple chart hits to their name, including the gold-selling ’Ready For Your Love’, Gorgon City’s mix of addictive basslines and big vocal hooks has kept them at the top of the scene since first emerging in 2013. Stepping up for a DJ set at SB17, the pair will relish the chance to delve more into the deeper, darker sounds of their underground roots. Hot Since 82 also stars, bringing a slice of the forward-thinking house music that has been drawing in the crowds at his His Knee Deep In Ibiza residency this summer.

Cast your mind back to Snowbombing 2015 when Eats Everything hosted a pop up party in local butcher shop ‘Hans the Butcher’, djing to a packed out crowd in the meat lovers paradise. The enigmatic party starter returns to Snowbombing in April for what is sure to be another meaty (and memorable!) performance. London duo Dusky, techno heavyweight Alan Fitzpatrick, Disciples, Skream and BBC Radio 1Xtra regular Toddla T will also be hitting the decks.

But it’s not just the world-class music line-up that’s earned Snowbombing the title of the world’s No.1 music festival on snow… Snowbombing boasts 650km of unadulterated piste, Europe's steepest slope, the infamous Hinterlux Glacier, and an award-winning Snow Park. Adrenaline-junkies can even embark on a paragliding experience to get a birdseye view over the stunning Zillertal Valley. Snowbombing also excels in wellness, with a dazzling array of luxurious spas and relaxation activities. Take in the breathtaking mountain views from a roof-top hot tub, stretch out with snow-yoga or unwind in balmy Moroccan-themed pools, saunas and relaxation rooms after a long day on the slopes or an all-night party. With all this, plus igloo raves 6000ft above sea level, mountain top stages, enchanted forest parties, the infamous pool party, chair-lift speed dating, Snow Limos, and Europe's largest festival road trip, Snowbombing has redefined wintersports holidays and shown what the ultimate alpine music festival looks and sounds like.