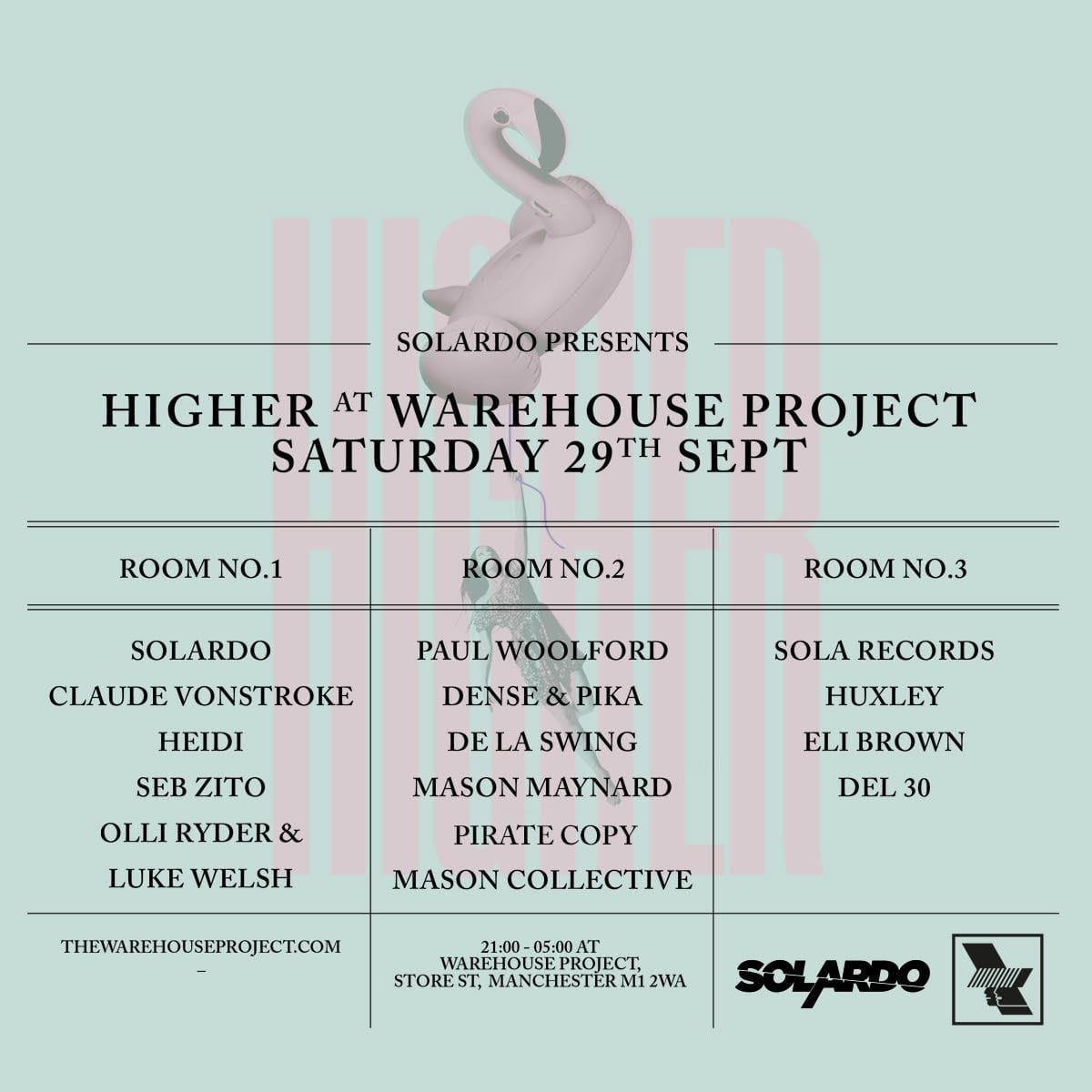 Award-winning Mancunian duo Solardo have announced the launch of their new club night seriesHIGHER, which they are kick starting with an eclectic line-up as part of the iconic event seriesWarehouse Project this Autumn, with the event taking place on Saturday 29th September.

Bringing a dynamic billing packed with an array of the finest names in dance music, Solardo Presents Higher will take place at Store Street, with the WHP brand gearing up for their final ever season in the legendary venue.

Sure to receive a rapturous reception in their home city, the pair, consisting of MRK1 and James Elliot, have become one of the most in-demand acts in the techno and house scenes, carving their own sound which has received support from the likes of Jamie Jones, Carl Cox, Green Velvet, and Skream.

Discussing the reasons behind the new event, Solardo explain: “We started HIGHER to showcase the breadth of our sound. Whether it’s tech house, techno, acid, Chicago, minimal or electro…. We play across the board and we want HIGHER to be a place to dance for people who feel the same way as us."

With Dirtybird boss Claude VonStroke, Heidi, and Seb Zito joining Solardo in the main room, the likes of Paul Woolford, Dense & Pika, De La Swing & Mason Maynard will head up a huge cast in Room No 2, with Huxley and Eli Brown in attendance as Solardo’s Sola Records imprint take over Room No 3.

HIGHER isn’t the first night that the pair have curated for Warehouse Project, as they put together a Solardo Sessions Boxing Day Special for WHP at the end of 2017. The sold-out event saw the duo go back to back with Skream, as well as sets from wAFF, Butch, Detlef and many others.  It was the perfect way for Solardo to close what had been a momentous year, as they entered 2018 with their second sold-out Solardo Sessions UK tour shortly after, which also included European dates and was followed by a relentless stint of shows in the States, (including sets at Movement Detroit and EDC Las Vegas).

Currently in the midst of acclaimed Ibiza residency alongside Eric Prydz at Hï Ibiza, Solardo’s launch of HIGHER adds another exciting layer to what has been a groundbreaking year for the pair.