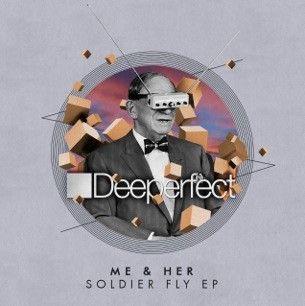 Over the years, Stefano Noferini's Deeperfect label has been home to some of the biggest techno producers in the world. Not only priding themselves on the calibre of artists to release on their catalogue, the label seeks to support the new talent rising across the globe. No better example can be had with their next release, the Soldier Fly EP from promising Swiss female duo, ME & her.

The 5 track EP consists of 3 originals from the talented duo, Soldier Fly, Hairy Beast and Jenny Kissed Me – all faithful to the style the girls are known for: a beautiful combination of dominant synths and percussion elements. Empowering the release with giant remixes is Bristol's Dubspeeka, known for his breakthrough debut release on Drumcode early 2015, and the second from label boss himself Stefano Noferini, both remixes adding that dance floor drive, without harming the unique style of the original.

Swiss duo ME & her have been making waves within the techno realm for the past few years, representing the rising talent of female producers/DJ's in the industry. With releases on Suara, OFF Recordings and Get Physical to name a few, gigging across Europe, India and Asia and joining the Clarisse Records residency on Ibiza Global Radio, 2015 has seen the duo firmly root themselves in the underground.

Another must have release from Deeperfect.