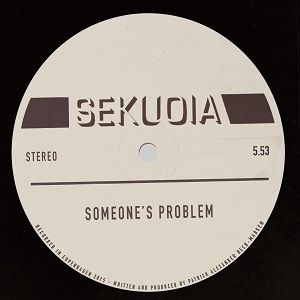 After a string of acclaimed EP releases, Danish producer and electric virtuoso Sekuoia is now preparing the release of his new single, the beautifully crafted ‘Someone’s Problem’ via Nowadays Records, ahead of the release of his forthcoming debut album later this year.

The track is a sonic brainwave of smooth bass lines and ebullient synth hooks. Intersected by a barrage of ghostly, chopped-up vocal samples and a steady beat, it is not hard to imagine getting lost on the dancefloor to Sekuoia’s chilled take on electro-dance. Held together by his unique and dreamy production style, ‘Someone’s Problem’ touches on a number of influences, such as Flume, Jamie XX and Lomovolokno.

Having previously worked with and remixed a host of acclaimed artists, such as Tomas Barfod, Sivas and MØ, the Copenhagen-based producer has put his newfound sound and musical approach down to his ambition to move forward and to produce something different from his previous releases: "I wanted to create a track that had more of an epic feeling than a lot of my previous tracks. I wanted to create an atmospheric dance track, that shuffled in just the right way and that could give a feeling of wanting to dance and get lost in the music, without taking anything else into consideration."

In support of his new single, Sekuoia is also pleased to announce that he will be embarking on a short European tour later this year. Kicking off at the Studenterhuset Aarhus in his homeland of Denmark on 29th September, the tour will see him visit major cities like Munich, Copenhagen and Paris before finishing at Hamburg’s Molotow on 29th October. Already a seasoned performer, Sekuoia has previously played concerts at Roskilde Festival, Iceland Airwaves, and the Amsterdam Dance Event. Last year the producer also played sold out shows in Berlin and London, and is now returning with a headline tour around Europe in October.

Sekuoia’s genre-defining new single ‘Someone’s Problem’ is due for release on April 26th 2016, and will be followed by his highly anticipated debut album later this year.