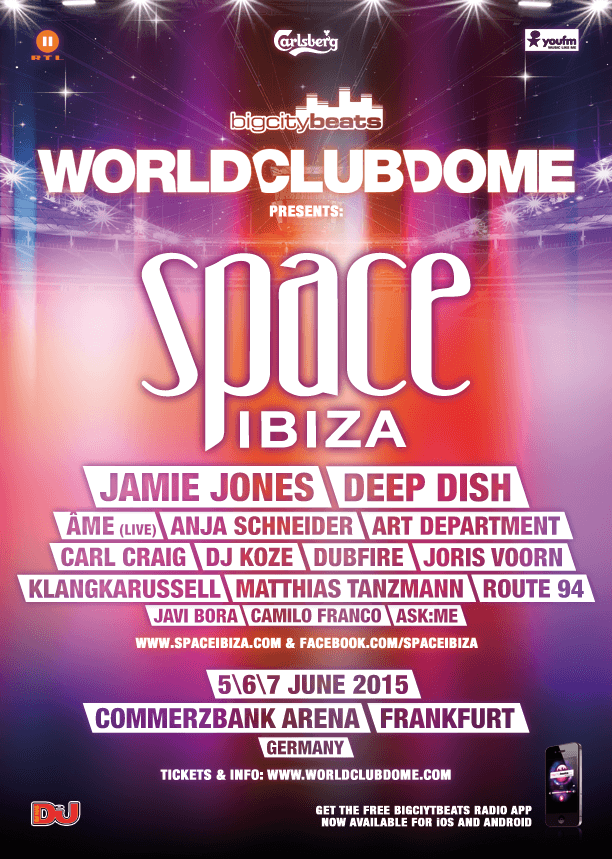 Big City Beats, one of the biggest festivals in Europe celebrated each year at the Commerzbank-Arena in Frankfurt, will host a Space Ibiza stage with its 2015 edition.

Over the 5th, 6th and 7th of June, the festival features more than 150 artists spread across the three day party, will complete its musical offering for the first time in history with a lineup of top artists under the brand of the best club in the world. Love (live), Anja Schneider, Art Department, Ask: I, Camilo Franco, Carl Craig, Deep Dish, DJ Koze, Dubfire, Jamie Jones, Javi Bora, Joris Voorn, Klangkarussell, Matthias Tanzmann and Route 94 will be in charge of transmitting the essence that is lived every summer in Ibiza to this celebration which undoubtedly is one of the most important events in a clubber’s calendar.

The festival has confirmed three of its major artists such as Hardwell, David Guetta and Avicii and also proposes to transform the magnificent facilities of Commerzbank-Arena in one of the biggest clubs in the world situated in a 500,000 m² area both inside and outside, offering 12 dancefloors with different musical offerings, from the current EDM to the calmer Chill Out rhythms.

The biggest club in the world fitted within a festival alongside the world’s most awarded club together in an unprecedented event that will bring Ibiza to central Germany during the first weekend of June.