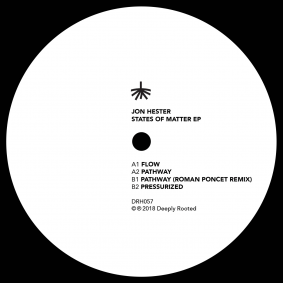 "I am very happy to welcome Jon Hester on Deeply Rooted. Not too long ago I noticed some of his productions while in a record store and I made an instagram story with one of his tracks. Soon-after we got in touch with each other. Whilst it has its faults, I love it when social media works in the direction of good music and helps connect likeminded artists! So here is his brand new 12" featuring a dope Roman Poncet remix! Enjoy, Dj Deep."

‘States of Matter EP’ very much represents Jon’s distinct approach to techno. Tracks like ‘Flow’ demonstrate a rolling rhythm as intricate percussion and metallic reverb operates throughout. The mesmerising ‘Pathway’ then features precision kicks and crackling atmospherics before moving into the rolling drums, twisted effects and pitter-patter sequences of Roman Poncet’s remix. Tying it all together, ‘Pressurized’ is an uncompromising cut complete with stuttering claps and quivering synths.

A1 Flow
A2 Pathway
B1 Pathway (Roman Poncet Remix)
B2 Pressurized