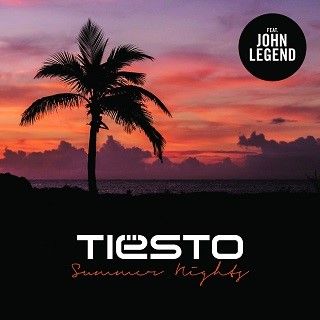 ‘Summer Nights’ represents the first time the duo has teamed up since the release of the Grammy award winning hit remix of, ‘All Of Me,’ in 2014. Together, John and Tiësto worked to create a track that stays true to John’s sensibilities as a live performer but that also incorporates the undeniable dance music energy that Tiësto is known for.

“I was really excited to work with John again following the huge success we had with my remix of ‘All Of Me,’” said Tiësto. “For ‘Summer Nights,’ we wanted to make a record that mixed the energy from my club tracks with his amazing soulful take on pop music and I’m really happy with the result. This record is definitely a bit of a musical departure for me but it was important to us that the end result really emphasize John’s funky soul vibe.”

The result is an irresistible summer jam that is as melodic as it is ebullient. Tiësto has created a fun, layered anthem that perfectly complements John’s soulful vocals, his voice taking center stage as he croons about making his summer nights last forever with his special someone.

Make sure to check out the new record by visiting, https://tiesto.lnk.to/summernights and be sure to follow Tiësto on his socials for more new content.

With a remarkable career spanning over 20 years, Tiësto remains one of the top dance music acts in the world. Revered for his live shows as well as for his production and remix work, Tiësto is a globally celebrated DJ that has been named “The Greatest DJ of All Time” by Mixmag and the #1 DJ by Rolling Stone. Through revolutionary moments such as being the first DJ to open the Olympic Games and headlining festivals like Coachella, Electric Daisy Carnival, Stereosonic, Tomorrowland, Ultra and more, he has helped pave the way for today’s modern music landscape. His 2014 album, A Town Called Paradise, yielded Tiësto his first platinum single in the United States with “Wasted” [featuring Matthew Koma] and his first gold single "Red Lights.” In February 2015, Tiësto was awarded a Grammy® in the Best Remixed Recording, Non Classical category for his remix of John Legend’s “All Of Me.” This was Tiësto’s first Grammy® Award and second Grammy® nomination.

Legend is a critically acclaimed, multi-award winning, platinum-selling singer-songwriter, film and TV producer, philanthropist and activist.  His musical work has garnered him ten Grammy Awards, an Academy Award®, a Golden Globe and the special Starlight Award from the Songwriters Hall of Fame, among others.   Most recently, he won his first Oscar, Golden Globe and Critic’s Choice Award for his song “Glory,” that he wrote and performed with Common, for the film Selma. He is currently working on a new album, while also actively supporting his #FREEAMERICA campaign touring prisons, jails and immigrations detention centers, and producing a variety of projects via his Get Lifted Film Co.