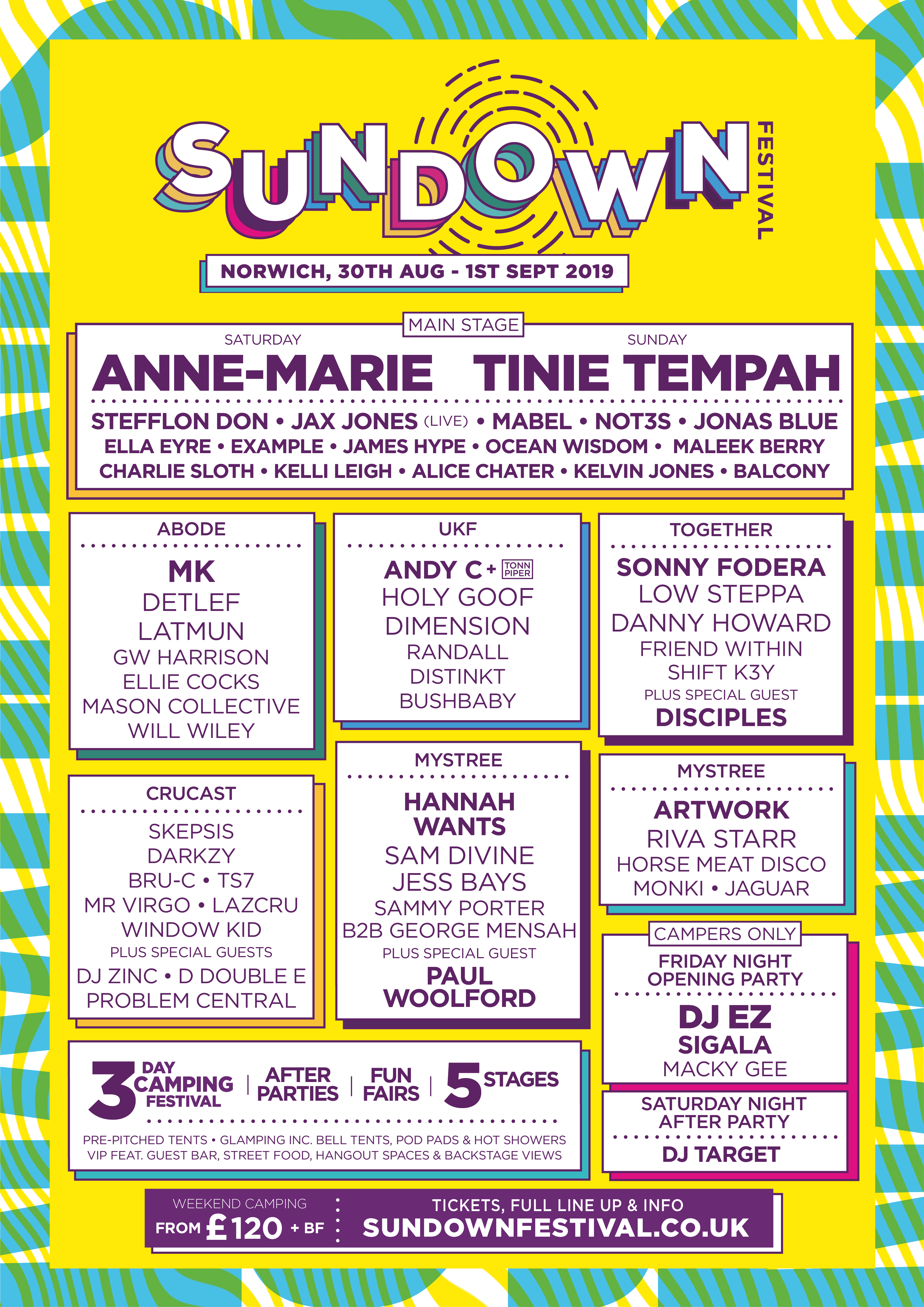 Stefflon Don has taken the international hip hop scene by storm since charging the charts with her world-wide smash ‘Hurtin Me’ featuring French Montana in June 2017. Since then, the MOBO award winner has worked with the likes of Lil Yachty, Jax Jones and Lethal Bizzle, releasing a string of career defining albums including her latest record ‘Secure’ which featured guest vocals from the mighty DJ Khaled in August 2018. With over 214 million Spotify streams on her iconic party anthem ‘Bum Bum Tam Tam,’ Stefflon Don’s fiercely infamous stage performances combined with her unique take on hip hop, rap and dancehall makes her upcoming performance on the Main Stage at Sundown Festival 2019 on Sunday a must see.

Regarded as one of the UK’s most prosperous rising pop starlets, 23 year old Alice Chater has already achieved huge accolades to her name. Having made a massive impression on will.i.am last year (who is now the Londoner’s mentor), Alice’s infectious pop melodies and high-intensity choreographed live shows position her as the next big name in British pop. Her most recent single ‘Thief’ is as emotionally driven as it is hard-hittingly catchy, with Radio 1’s Clara Amfo drawing similarities to that of Ariana Grande and Ann-Marie.

Gearing up for his main stage performance at Sundown 2019, British sensation Kelvin Jones is currently in the studio penning his hugely anticipated and hotly-tipped next record. Kelvin rose to fame in 2014 with his breakout single ‘Call You Home’ which has since been certified Gold in Germany and with over 100 million streams on Spotify, expect emotional acoustic tracks when Kelvin Jones seizes Sundown this summer.

Part of the UK’s most celebrated urban collectives, Roll Deep, London born DJ Target will be hitting the decks at Sundown’s Official Saturday After Party. Having performed across the world in massive venues throughout The USA, France, Belgium, Ibiza, Greece, Portugal and Cyprus, Roll Deep’s debut album ‘In At The Deep End’ has sold over 95,000 copies in the UK and has safeguarded DJ Target as one of the hottest DJs and producers in the current urban scene.

One of the UK’s most exciting DJs, Jaguar will be joining the Mystree stage at Sundown 2019. Whether its hosting her bi-weekly show on Reprezent Radio, tearing up clubs across the country or lending her ear to BBC Music Introducing as a curator, interviewer and host of showcases and live events, Jaguar will be joining the likes of Artwork, Monki and Horse Meat Disco on Saturday 31st August.

Raring to grasp Sundown Festival’s Together stage takeover on the first day of processions, Shift K3Y cleverly fuses R&B and contemporary pop together with classic house and garage beats to succumb to a totally individual sound. Having remixed some of the biggest tracks in pop and house, the London DJ, producer and songwriter recently released his latest single, “Rhythm Of The Drum” to huge amounts of critical acclaim.

Bolstering up their hugely anticipated stage at this year’s Sundown Festival 2019, CruCast have added further names to their already epic line-up. Joining DJ Zinc, D Double E and Problem Central, CruCast are delighted to announce Skepsis, Darkzy, Bru-C, TS7, Mr Virgo, Lazcru and Window Kid to their Saturday line-up. Expect huge sets and massive beats on what is expected to be the ultimate party stage.

Renowned for its star-studded line-ups spanning grime, R&B, pop, dance, electronica and more,Sundown Festival has become the essential summer closing party, providing one last chance to party in the sunshine with some of the world’s most exciting artists.

Tickets are available at www.sundownfestival.co.uk/tickets. Follow @SundownUK for more info.