Sundown Festival is back for 2017 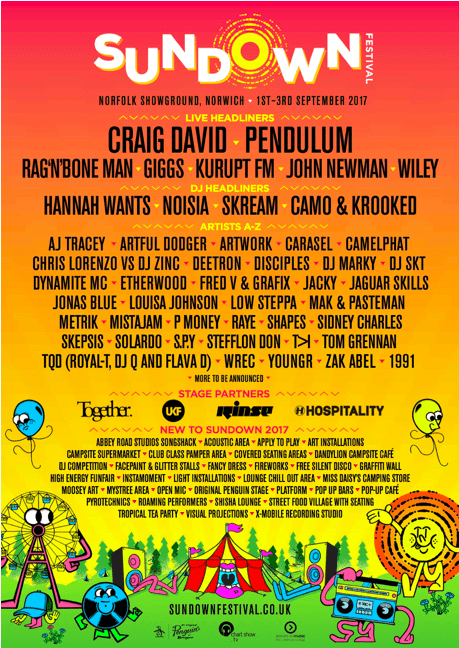 Sundown Festival is back for 2017

Back bigger and better than ever, 2017 will see Sundown cement its reputation as the festival season’s essential closing party, with a huge lineup including headliners Craig David and Pendulum. Renowned for delivering a lineup of the most sought after names from all corners of pop, urban and dance music, this year the festival expands even further – adding another two stages and yet again collaborating with some of the most revered brands in underground music.

As an undisputed legend of UK music, few artists have had a comparable career to Craig David. Initial breaking through with Artful Dodger on ‘Re-Rewind’ and the roaring success of his debut LP ‘Born To Do It’, his huge recent chart-topping comeback album ‘Following My Intuition’ and collaborations with cutting edge new acts like Kaytranada have made him more relevant now than ever.

Following a lengthy absence from performing, fellow headliners Pendulum are finally returning to the live stage for a signature high octane headline slot at Sundown 2017. Fusing pounding drum ‘n’ bass with a fierce live rock sound, few bands can produce the sheer energy that they do. Expect tunes like ‘Tarantula’ and ‘Blood Sugar’ to send the crowd into a frenzy.

Elsewhere on the Main Stage, man of the moment Rag ‘N’ Bone Man will be bringing ‘Human’ to the festival for what is sure to be one of the singalong moments of the weekend, alongside John Newman and his trademark modern soul sounds and X-Factor winner Louisa Johnson.

Following a truly groundbreaking 12 months for UK urban music, this year’s Sundown will play host to none other than godfather of grime Wiley, alongside faces of the future AJ Tracey and Stefflon Don. Champions of UK Garage and stars of the BBC’s hilarious ‘People Just Do Nothing’ Kurupt FM also get a look in.

For those looking for the proper festival experience Friday will see an exclusive Weekend Camping Ticket Only Opening Party headlined by UK rap don Giggs. The ‘Talking Da Hardest’ legend will kick things off in style alongside Radio 1’s Mistajam, Jaguar Skills and Shapes.

Providing one last chance for a dance in the sun, and acting as the perfect remedy for the end of festival season blues, Sundown 2017 is a must visit for all fans of pop, urban and dance music. Tickets are available on Friday 31st March from 10am. Follow @SundownUK for more info.