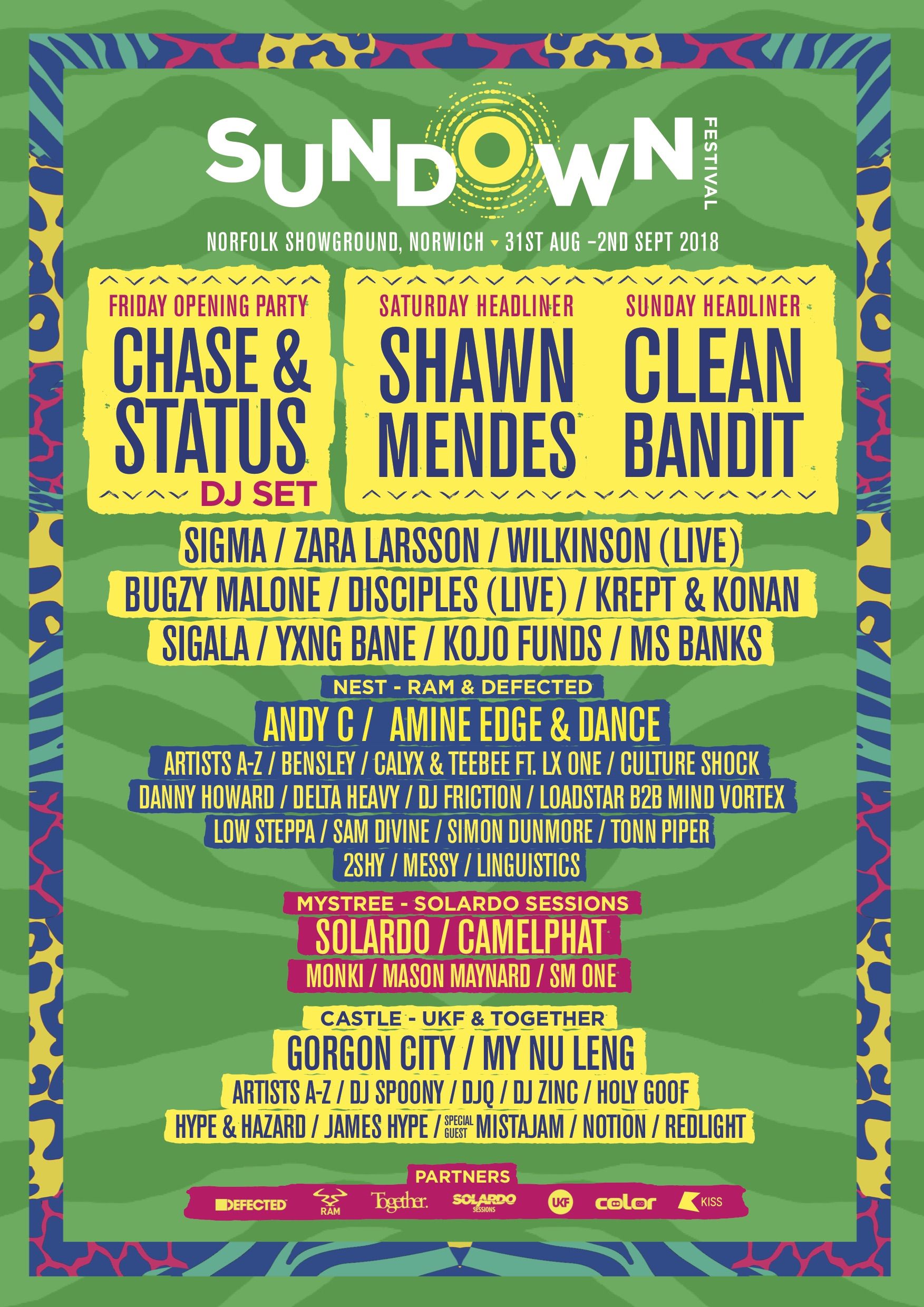 Returning to the Norfolk Showground this summer for yet another show-stopping year, Sundown Festival is proud to announce its biggest line-up yet for 2018!

Renowned for its star-studded line-ups spanning grime, R&B, pop, dance, electronica and more, Sundown has become the essential summer closing party, providing one last chance to party in the sunshine with some of the world’s most exciting artists. This year, Sundown welcomes Canadian pop superstar Shawn Mendes and chart-topping superstars Clean Bandit as festival headliners, with Chase & Status topping the bill for the Campers Only party on the opening night.

Having first shot to worldwide fame in 2013 through a series of viral Vine videos, 19-year old Shawn Mendes has become a global pop sensation. Having worked with international pop icons Taylor Swift, Alicia Keys and superstar of the moment Camila Cabello to name a few, 2018 is set to be another huge year for the Toronto-born star. Shawn has recently hinted at a hotly anticipated third album, and his Sundown Festival Main Stage appearance will be one of his only UK shows this year.

One of the most infectious and dynamic pop groups of the 21st century, Clean Bandit guarantee to bring sun-soaked vibes to the festival, with their fusion of classical strings, electro beats and vintage pop hooks. A treasured and adored part of contemporary British pop culture, their worldwide smash hits ‘Rather Be’, ‘Real Love’ and Christmas number 1 ‘Rockabye’ are global feel-good anthems.

For those looking to kick the weekend off in style, Friday will see an exclusive Campers Only Opening Party hosted by none other than Chase & Status. One of the most iconic duos in drum and bass history, the legendary twosome released their fourth studio album ‘Tribe’ last year to critical acclaim and will no doubt get the party started with their unmistakable catalogue of certified bangers.

Swedish pop sensation Zara Larsson is also set to touch down at Sundown Festival this year, and is bound to bring a truly unmissable Main Stage moment to the festival. At just 20-years old, Zara has become one of the most streamed female artists of recent times, thanks to smash hits ‘Lush Life’, ‘Ain’t My Fault’, ‘So Good’ and her chart topping duet ‘Symphony’ with Sundown Festival headliners Clean Bandit. Here’s hoping to a live duet in August, when Zara Larsson comes to town.

Few artists have the star quality of MOBO award-winning duo Krept & Konan, who will inject the festival with their authentic London grime vibes, while Manchester’s lyrical genius Bugzy Malone will also grace the Sundown Main Stage this summer. A performance from East London star Yxng Bane, who's genre-hopping blend of Afrobashment has a truly global sound, will be another standout moment at Sundown, as will an appearance from Stefflon Don, JME and Stormzy collaborator Ms Banks, who burst onto the scene with her impressive Fire in the Booth session in 2016. With afro-swing and rap maestroKojo Funds also set to play Sundown, expect big beats and carnival vibes at this end of season extravangaza.

Taking the tempo up a notch is dance duo Sigma, who’ll get crowds to their feet with a perfect summer soundtrack, along with Sigala, a production pair known for their heavyweight collaborations with the likes of Sundown veterans Craig David and Ella Eyre.

The biggest chart anthems and favourites reign supreme at Sundown this year, lead by d’n’b heavyweight Wilkinson who is sure to light up the Norfolk Showground with an electric journey through smashes like ‘Afterglow’ and ‘Sweet Lies’. The hits keep coming, with arguably the leading dance producers of recent times Disciples continuing their breakthrough 18 months with another dazzling live set at Sundown this year.

The Nest stage, this year partnered by RAM and Defected, will host the likes of influential RAM co-founder Andy C, known for his genre-defying performances around the world, plus Delta Heavy who are certain to fill the dancefloor with their pioneering drum and bass. With Calyx & Teebee ft. LX One rounding up the bill with their essential mixes, the Nest sees some of the best legendary names in bass take to the decks over the weekend, including Amine Edge & Dance, Bensley, Culture Shock, Danny Howard, DJ Friction, Loadstar B2B Mind Vortex, Low Steppa, Sam Divine, Simon Dunmore, Tonn Piper, 2SHY, Messy and Linguistics.

The Castle stage, presented by the renowned figures of Together and UKF, will play host to mind-blowing bass maestros Gorgon City, who’ve become a worldwide attraction with their infectious sets from Ibiza to Ireland, alongside killer remixers RedLight and ‘More Than Friends’ creator James Hype for a stage that promises the best in genre blending electronic sounds, with appearances from My Nu Leng, DJ Spoony, DJQ, DJ Zinc, Holy Goof, MistaJam, Notion and more.

After receiving a rapturous reception in its inaugural year, the Mystree Forestis back bigger and better than ever, carrying Sundown Festival into the early hours of partying. Confirmed already are the likes of Manchester’s own house and techno kings Solardo, joined by Grammy nominees CamelPhat and Radio 1’s disc-spinning favourite Monki, plus Mason Maynard and SM One. Shrouded in curiosities, getting lost in the Mystree Forest is an experience that all at Sundown-goers must dive into.

Shawn Mendes says:
"I can't wait to visit Norfolk to play Sundown festival for the first time for the end of the festival season! It's going to be insane – see you there!"

Zara Larsson says:
“I’m so excited to come back to the UK to perform at Sundown Festival! The UK has a special place in my heart and I always have the best time performing there.”

Sigma says:
“We can't wait to be back in Norfolk and play Sundown Festival! This will be our second time playing the festival, we had such an amazing time the first time around that we're back for more!”

Providing one last chance for a dance in the sun, and acting as the perfect remedy for the end of festival season blues, Sundown 2018 is a must for all fans of pop, urban and dance music.

Tickets are available on Friday 23rd February from 9am – www.sundownfestival.co.uk/tickets