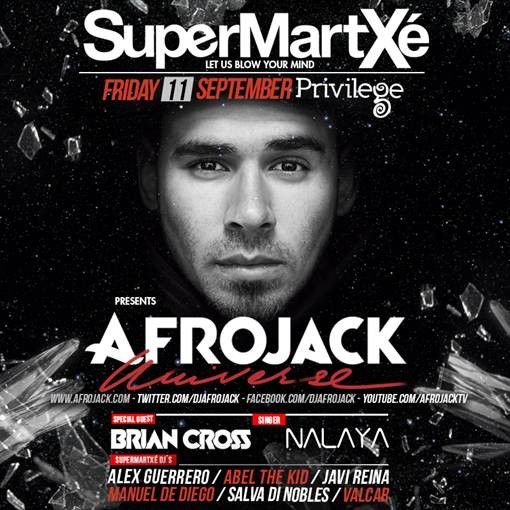 Immersed in one of its best seasons, SuperMartXé, considered one of the major promoters of Entertainment and Nightlife worldwide, has everything ready for Friday in his summer residence at Privilege Ibiza, to one of the most influential names these days in the dance music industry; Dutch DJ and producer Afrojack.

Afrojack has to his credit with a long list of awards among them two consecutive Grammy Awards – Best Remix (the song “Revolver” by Madonna) in 2011 and the Best Song in Rap / Hip Hop (for “Look At Me Now”, co-produced with Chris Brown) in 2012- ; several MTV Europe Music Award for Best Electronic Artist; a Billboard Music Award Best Song on Radio,…

The Hollywood Reporter defined this young artist as “global icon to conquer the world “; in 2014 was Forbes who placed him in the position No. 6 of the highest paid DJs, in addition to dedicate the cover of the magazine.  With this unstoppable career, it is not surprising that with only 28 years, Afrojack has been the second world DJ to translate their hands on the Hollywood Walk of Fame.

Among his career highlights there are the usual collaborations with greats figures like: Pitbull & Ne-Yo in the single #1 “Give Me Everything”, David Guetta in the worldwide hit “Titanium,” Madonna (with whom he won the Grammy), Chris Brown or Beyoncé.

Among the most recent, could be highlighted Snoop Dogg, Wiz Khalifa or Sting, between some of the partners of their first album “Forget the World(2014).   Afrojack also runs his label, Wall Recordings, which already signed artists such as R3hab or Sidney Samson.

SuperMartXé, which comes this week in the final stretch of its “SUPERMARTXÉ LIVE TOUR CHINA 2015”, the tour that held no more and no less than 24 events in 28 days around the main cities of China, has designed for this special occasion a mega production inspired by Las Vegas.

The evening will also feature a special session with Special Guest, Brian Cross;  SuperMartXé djs Alex Guerrero,  Abel The Kid , Javi Reina, Manuel de Diego, Salva Di Nobles and Valcar, and of course with the live voice of Nalaya BROWN, and accompanied of course, by a battalion of performers, acrobats, Bike Air Shows, fire shows, dancers and special effects of what will undoubtedly be an unforgettable night.

SuperMartXé let us blow your mind! Come on, let us show you the Afrojack universe!