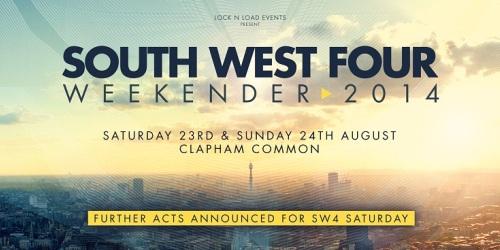 With over eighty of the world’s greatest DJs and live electronic acts now announced for South West Four 2014, the time has come to form the eight individual worlds of music in which they will play. These stages form the festivals spine of the action and will ensure that the full spectrum of electronic music is catered for. Hosts in previous years include titanic forces such as Carl Cox & Friends, Bedrock, RAM Records, Together and Cocoon. In 2014 we bring you five brand new arena hosts, all of which will guarantee you a weekend of unforgettable memories, that will live with you forever…

Representing the centre of the weekend’s festivities, South West Four’s iconic main stage has witnessed a catalogue of incredible moments in its ten year history. Sat in the picturesque surroundings of Clapham Common, both in-demand sounds and breath-taking production align as we showcase a hand-picked selection of the world’s greatest acts. The unstoppable machine that is Above & Beyond headline in their only London festival performance of 2014 alongside a heavy hitting all-star cast including Alesso, W&W, Fedde Le Grand, Arty and Sunnery James & Ryan Marciano. Danny Avila and Oliver Heldens are rewarded with SW4 debuts as are New World Punx (Markus Schulz & Ferry Corsten), as they make their way to London for the first time.

SW4 Saturday welcomes DJ Magazine to host one of the finest selections of underground house and techno the Capital has ever seen. With each of these acts cementing their status at the forefront of the scene over the past twelve months, we guarantee that all eight will be at the top of their game. Returning to London after a roadblock Used + Abused at Brixton Academy, Loco Dice will co-headline alongside Hot Creations boss Jamie Jones. Berlin tastemakers Tale of Us and the in-demand talents of Tiga vs Audion join us for the very first time, in addition to Ibiza favourites Paco Osuna and Robert Dietz. Add to this the full UK debut of techno supergroup Better Lost Than Stupid (Matthias Tanzmann, Davide Squillace & Martin Buttrich) and you have a simply mindblowing offering of underground sounds.

After Sasha’s ‘Last Night on Earth’ event destroyed Brixton Academy on New Years Eve, South West Four is delighted to announce that the SW4 icon will return to London to present the next instalment, this time called Last Day On Earth. Following in its predecessor’s footsteps, LDOE will showcase an unrivalled collection of underground powerhouses that are sure to keep you moving well into the night. In his only UK show of 2014, Paul Kalkbrenner brings his incredible live show to SW4 for the first time, alongside Seth Troxler, Booka Shade [Live], Guy Gerber, Magda and Henry Size, who showcases his live band show in a UK festival exclusive. For the icing on the cake, Josh Wink celebrates the 20th Anniversary of his seminal label Ovum Recordings at SW4 2014 with an exclusive retrospective set.

Playing a crucial role in London’s clubbing calendar is its longest running weekly club night, The Gallery. Forming the foundations for thousands of clubbers diaries every week, SW4 is delighted to welcome back the Ministry of Sound party to host a leading trance line-up. Long time Gallery favourite Markus Schulz will play the coveted headline set, on top of performances from Aly & Fila, John O’Callaghan, Cosmic Gate ft Emma Hewitt and Super8 & Tab. As well these, we also welcome a cluster of rising talent with Andrew Rayel, Omnia, Jerome Isma-Ae and an early afternoon back-to-back session courtesy of Will Holland & Estiva.

The magic of the main stage will live on throughout SW4 Sunday as it hosts some of the most vibrant and forward-thinking artists of today. Representing the biggest booking in South West Four history, deadmau5 makes his SW4 debut in his only London appearance this year. As we build up to this final set of the weekend, more defining moments come courtesy of Eric Prydz, Andy C and Pete Tong, all of which will be welcomed back with open arms. Further SW4 debuts are handed to the outstanding talents of Madeon, Wilkinson, Stanton Warriors, GTA and Karma Kid as well as SecondCity arriving off the back of his incredible summer anthem. Completing the main stage bill is US hip hop sensation Pusha T, who joins us as the stage’s very special guest.

Our continued aim to showcase the greatest DJ talent on earth sees us welcome Maceo Plex to launch his brand new project, exclusively at SW4. In one of the biggest debut performances of the entire weekend, SW4 Sunday will witness the birth of the Dream Don’t Sleep Arena. Hosted by Maceo himself, the Ellum Audio boss will be joined by the undisputed ambassador of techno Marco Carola for his final London performance of 2014, as well as legendary Bedrock boss John Digweed. Dirtybird head honcho Claude VonStroke will fly in, as will SW4 newcomers Boddika, Danny Daze and Kim Ann Foxman. The Dream Don’t Sleep Arena will also welcome one of the finest female talents to have ever existed with Maya Jane Coles who makes her hugely anticipated return to Clapham Common.

As the most in demand DJ in British house music, Eats Everything returns to South West Four on Sunday 24th August to host a stage at a UK festival for the very first time. Looking to push boundaries wherever possible, Eats has curated a line-up that simply speaks for itself with names such as Laurent Garnier, Skream, Heidi and Catz N Dogz all joining him on his big day. Bicep and Simian Mobile Disco will go head-to-head in a tasty looking battle of the beats as will the sought after sounds of Special Request vs Marcus Intalex. Completing this broad platter of sounds is the outstanding Kölsch, who will be treating the Common to his amazing live performance.

With the bubbling multi-genre melting pot Speakerbox growing into one of the biggest global brands for fresh new music, we can’t wait to welcome them at SW4 this August. Hosted by one of the faces of BBC Radio 1 MistaJam, this arena acts as your one-stop shop for the very best in fresh, new sounds. Topping the bill is drum and bass hero Netsky [Live], as well as three of house music’s hottest properties in MK, Gorgon City and Shadow Child. Friction makes his big return to Clapham in addition to New Jersey’s Just Blaze, Oxide & Neutrino, My Nu Leng and B.Traits. As two of the urban scene’s most inspiring figures, we are also delighted to welcome The Street’s Mike Skinner go back to back with MJ Cole in an exclusive performance only to be heard at SW4.

Two days. Eight stages of music. The crowning glory of London’s clubbing calendar is back…