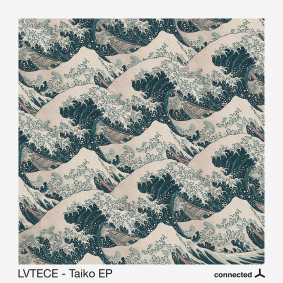 The Connected label continues its fantastic run of form with a new EP from electronic duo LVTECE.

This pair represent their native Parisian scene, where they host their Horizons parties and have shared the stage with the likes of Whitesquare and David Mayer. They mix up house and techno influences with the ethnic rhythms and organic textures that define this label. They have previously made their way into record bags belonging to the likes of Black Coffee and this new one is inspired by traditional Japanese drums.

Enthralling opener ‘Mun’ is the most afro house track of the release and starts with a groove that creeps through the undergrowth in mysterious and suspenseful ways with deep bass. A dramatic, soaring, organ-like line breaks out of the mix and will cast a magical spell on the floor.

The excellent ‘Yoru’ reveals a pulsating groove with a techno arp and a moody, emotive piano chord progression which rises in sequenced crescendo and makes for a beautiful and detailed journey that has already been previewed by Whitesquare on his recent Keinemusik Radio Mix.

Last but not least, ’Taiko’ is named after the powerful drums that are its inspiration. A rolling rhythm with flavours reminiscent of early 80’s electro, it’s centered around a tom tom groove and an eery dog bark, growling bass and wobbling risers leading to a breakdown with an almost fairytale of a melody played on Taiko drums. This track has real charm.

Once again, Connected has unearth exciting and enchanting new artists who truly impress with their inventive offerings.