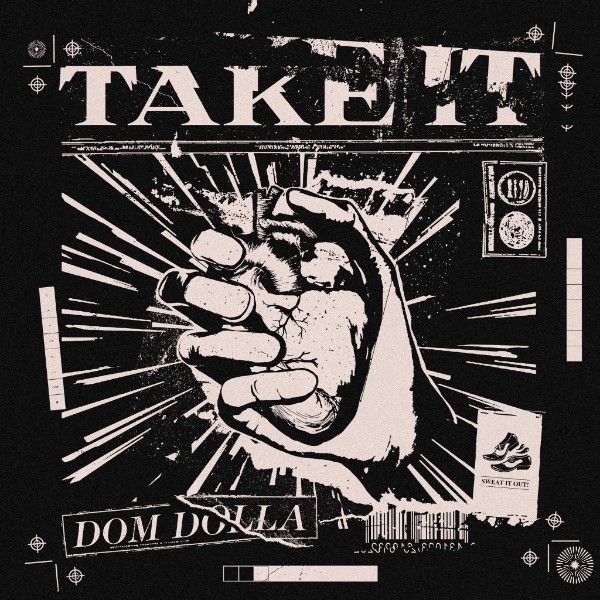 Dom Dolla makes a triumphant return to 2018, with ‘Take It’, a deep, dark, heaving club mix that combines an evocatively catchy vocal, with a deep groove beat to create one hooky production. Off the back of his 2017 ARIA nomination for Best Dance Release for the huge collaboration with Torren Foot on ‘Be Randy’, Dom has been busy touring the globe, stewing away in the dark corners of clubs, tweaking ‘Take It’, until it reached tech-house perfection.

"I put the bones of this tune together in a hotel room while road tripping between gigs in Arizona earlier this year, feeling heavily inspired by the west coast club audiences I was playing to. The vocals were written and recorded while sick in bed, using my tour manager's iPhone earbud microphone and a duvet as my vocal booth. At the time I had planned on replacing my recording with a cleaner take when I got home to Australia, but was never able to recreate something I liked as much, so it stayed! It's been slaying it for me ever since.", Dom Dolla had to say on explaining the origins of ‘Take It’.

Having received over 20 million streams and consecutive ARIA Club Chart #1’s for the former and ‘Define’, his 2016 collaboration with Go Freek, it becomes obvious that perfection is a common occurrence for Dom Dolla. Also, giving reason to why Dom has been cherry picked for official remixes by the likes of RUFUS DU SOL, Flight Facilities, Peking Duk, Madison Avenue, Motez and Sneaky Sound System and ongoing festival slots at Beyond The Valley (closing out the festival 4 years running), Splendour In The Grass, EDC Las Vegas and Splash House Palm Springs.

With Chris Lake, Kyle Watson and Billy Kenny already jumping on board, ‘Take It’ will be sure to garner a solid amount of support from the big-dogs. This goes without saying when Pete Tong is your biggest supporter, playing a spate of Dom Dolla releases across BBC Radio 1, a guest mix on ‘All Gone Pete Tong’ and chosen as support for Pete Tong’s huge orchestrated ‘Ibiza Classics’ show at Melbourne’s Sidney Myer Music Bowl.

After being tried and tested, this track is 100% guaranteed to rip your heart out and “take it” straight onto the darkest dance floor out there. Australia, hold tight for a tour announce very soon, otherwise you can catch Dom on dance-floors throughout the US from July.

‘Take It’ is out now via Sweat It Out.