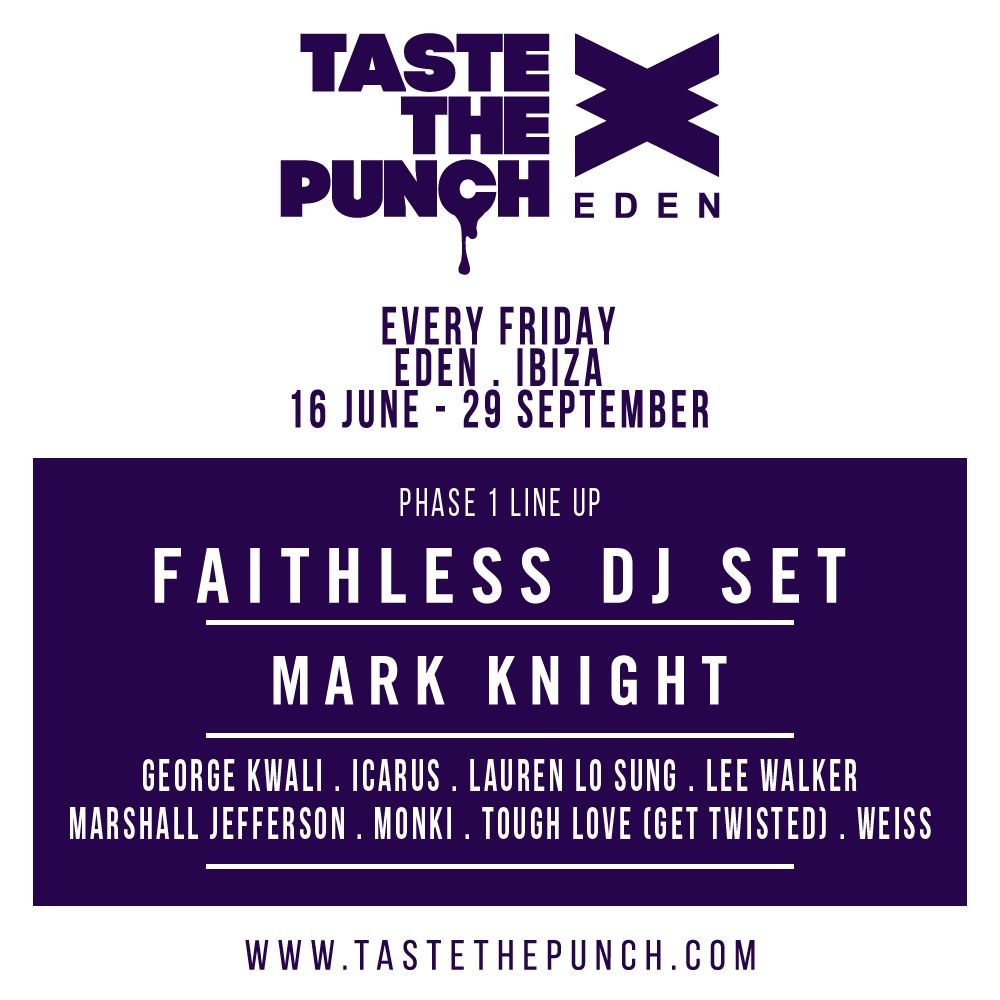 Chief amongst the new names to be announced is the legendary DJ Sneak. A larger than life character who was part of the early Chicago scene, his label I'm A House Gangster is behind many seminal house anthems, and the man himself has had many hits over the years, from 'You Can't Hide From Your Bud' to more recent efforts like 'Just Play The Music.' He still lays it down like no other all over the world and plays Taste The Punch on 8th September.

Next up is Chus & Ceballos, the taste making tech house duo behind the hugely influential Stereo Productions label who play on August 25th and September 22nd. The prominent pair publish their own weekly radio show and podcast as well as DJing around the world from BPM to the WMC, and as well as solo tunes they also link with big stars like Prok & Fitch, who themselves play on August 4th and September 29th. The UK pair release on labels like Toolroom and Suara and count floor wreckers like 'Pitch Roll' and 'Double Vision' amongst their arsenal of tunes.

On July 14th, UK bass house man Riton is in town and will bring with him hits like 'Rinse & Repeat' and 'Betta Riddim' real dancefloor slayers, as are his big remixes of Disclosure and Frances. Another UK outfit, Camelphat currently riding high with the 'Hangin With Charlie' EP on the legendary Relief Records, then lines up on September 22nd.

Fans of German pair and scene veterans Format: B then need to put September 29th in the diary. The Formatik Records bosses will roll into town with their funk driven tech house sounds and driving drums and are sure to get people in a spin.

Danish DJ and production machine Christian Nielsen is the new name added to the June 30th party and is known for his fresh and modern deep house on labels like Dance Club, Play It Down and Glasgow Underground. Elsewhere, award winning Dublin DJ and FM104 host Al Gibbs plays on August 4th, Too Tall plays twice in both August and September and Taste The Punch residents and able house selectors Nigel Clarke and Paul Malcolm complete the line-up for the closing party on September 29th.

In just four years, Taste The Punch has established itself as one of the most authentic party experiences in the UK. Founded by a pair of brothers in Luton, guests like Pete Tong, Claptone, Annie Mac and B. Traits all headlined the party which last year went on to host their own stage at Eastern Electrics. This first Ibiza season is sure to find them bring something new and fresh to the island, as well as legions of hardcore regulars who know exactly what the brand stands for.

Taste The Punch bring 'the punchbowl' to Ibiza and with the new additions announced today, this is shaping up to be one of the most talked about new parties on the White Isle this summer.