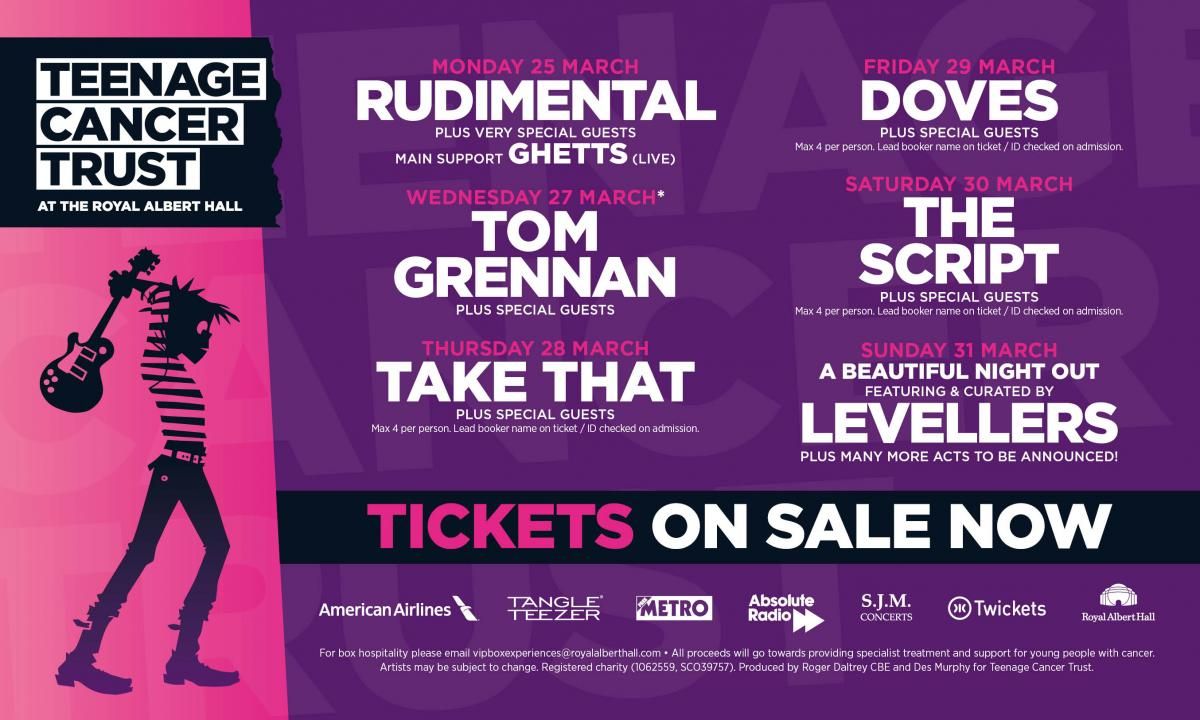 Teenage Cancer Trust at the Royal Albert Hall is proud to announce special guests for the performances on the 26th, 27th and 28thMarch.

Additionally, extra seats will be released at 10am Friday 15th March for the following dates: 26th, 27th, 28th, 29th and 30th March. The seats will be in the choir section, either side of the hall’s majestic organ.

Two more comedians will be joining Kevin Bridges, John Bishop, Kerry Godliman, Romesh Ranganathan, and Tommy Tiernan for ‘An Evening Of Comedy’ on 26th March. A precocious talent who exploded out of the UK comedy circuit, Seann Walsh has appeared on countless TV shows and is set to come to Netflix with the game show Flinch. Seann released a comedy DVD in 2013, appeared on the US chat show Conan and starred in 2018’s Strictly Come Dancing.

Susie McCabe’s rise through the ranks of stand-up has been similarly meteoric. She has supported the likes of Ardal O’Hanlon and Stewart Francis on their national tours, and had four sell-out shows at the Glasgow International Comedy Festival. 2019 will see her make a much-anticipated return to the Edinburgh Fringe with her show Domestic Disaster.

Joining Tom Grennan on 27th March will be Zuzu and Rose Gray. An offbeat singer-songwriter from Liverpool, Zuzu has rapidly been making a name for herself through her punky power pop. Singing unashamedly in her scouse accent, she writes songs in the indie tradition of bands like Bright Eyes and Pavement, and has supported Australian singer Courtney Barnett on tour. She released her debut EP Made On Earth By Humans in 2018, and has put out a series of singles, including ‘Dark Blue’ and ‘Can’t Be Alone’, since then.

Growing up in a sprawling artistic family in East London, Rose Gray has put out two lush, affecting singles this year: ‘Blue’ and ‘Good Life’. Channelling the soulful vocals of Erykah Badu and Amy Winehouse as well as the atmospherics of Massive Attack, she combines the old and the new to stunning effect.

Headlining the evening will be BBC Introducing Artist Of The Year Tom Grennan. The singer-songwriter has had a phenomenal 2018, going from breakout star at the beginning of the year to a nationwide sold out tour in October, including a date at the O2 Academy Brixton. Tom released his Top 5 debut album Lighting Matches to huge acclaim, and performed at festivals all over Europe in the summer. With more appearances coming this year including at the Neighbourhood Weekender in May, his 2019 is set to be equally as big.

On 28th March, Take That will be joined by chart-topper James Arthur. Since winning the ninth series of The X Factor in 2012, James has sold over 25 million records worldwide as well as touring both the UK and Internationally. As well as reaching musical milestones, he has also been nominated for two BRIT Awards and an American Music Award for 'Best New Artist'.

James recently featured on the highly anticipated ‘Greatest Showman Reimagined Album’ with Anne-Marie and his most recent single, ‘Nobody’, was released earlier this month, seeing him collaborating with Martin Jensen.

Completing the headliners for the remaining nights are: Rudimental, Doves, The Scriptand Levellers.

Legendary frontman of The Who, Roger Daltrey CBE has been the driving force behind Teenage Cancer Trust's Royal Albert Hall concerts since they began in 2000 and is an honorary patron for the charity.  These incredible shows have played a vital role in helping the charity to provide 28 specialist cancer units and over 60 nursing and support staff in NHS hospitals across the UK, making an incredible difference to young people diagnosed with cancer.

2019’s impressive line-up adds to an extraordinary legacy that has seen unique, once in a lifetime performances like Noel Gallagher and Damon Albarn performing together for the first time ever in 2013, Sir Paul McCartney in 2012, plus everyone from Muse to The Cure, Tinie Tempah, Florence + The Machine, Ed Sheeran, Kasabian, Stereophonics, Paul Weller, Olly Murs, Eric Clapton, Robert Plant, Sir Tom Jones and many more. And, of course, some of the greatest concerts of the past 20 years fromThe Who.