Telemachus drops visuals for ‘I Am Delicious And Cute. So I Will Go Buy Again’

Telemachus drops visuals for ‘I Am Delicious And Cute. So I Will Go Buy Again’

Today, South London avant-garde producer Telemachus drops tranquil visuals for ‘I Am Delicious And Cute. So I Will Go Buy Again’, taken from his recently released album ‘Boring & Weird Historical Music’ on High Focus Records. Created by Telemachus and Ugly Duck Studios, the video allows you to sit back and take in the peaceful surroundings whilst the lead character sets off on a river voyage.

‘Boring & Weird Historical Music’ is predominantly instrumental but does have a handful of collaborations with vocalists Killa P, Jerome Thomas, RHI, Penelope Oddity and Chris Belson. ‘I Am Delicious And Cute. So I Will Go Buy Again’ is a meditative journey upriver, whilst ‘Wickedest Ting’ completely flips the switch with a dancehall barrage from Killa P. Another highlight is the apocalyptic jazz of ‘Greed’ which features the remarkable neo-soul vocals of Jerome Thomas.

Growing up in South London at the turn of the millennium, a youthful Telemachus soaked up the frequencies of late-night Choice FM and underground pirate radio, falling deeply in love with Hip-Hop, Jungle, Dancehall, 2 Step and Grime. As a result, he fell into the UK Rap scene and went on to spend years producing under the pseudonym Chemo. Renowned as a hard worker with a keen ear for the unusual, Chemo could count cult icons such as; Jehst, Roots Manuva and High Focus Records as family.

His relationship with High Focus goes back many years and he has mixed and mastered almost all High Focus records to date as well as producing for Jam Baxter, Dirty Dike, Rag’n’Bone Man, Onoe Caponoe & TrueMendous amongst others. Outside of the label, Chemo has played a crucial part in pioneering the new generation of UK Rap and Hip-Hop and has been recognised consistently as one of the most prolific producers of his time. 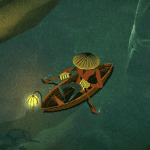