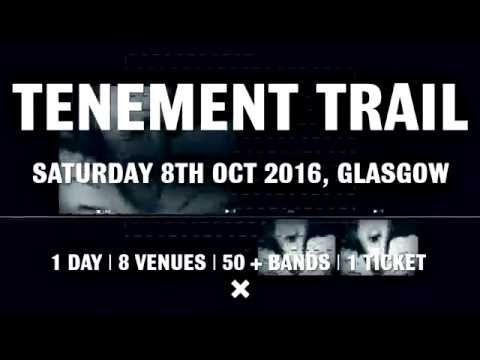 Scotland’s biggest inner-city music festival Tenement Trail have revealed fifteen new bands to the whopping line-up including Pronto Mama, Sinderins, Medicine Men, Shogun and TeenCanteen as well as announcing The Priory Bar as the ninth venue for this year’s festival.

In the month that Tenement TV will celebrate their fifth birthday, Scotland’s largest music platform are throwing one hell of a party with a line-up featuring indie icons Milburn, Crash Club, Be Charlotte, Tijuana Bibles, The Bar Dogs, The Van T’s, Barrie-James O’Neill and many, many more.

Bands will put excitement in the air and sweat on the walls in venues including 02 ABC1, 02 ABC2, The Art School, The Art School (Vic Bar), King Tut’s, Broadcast, Nice N Sleazy, Flat 0/1 and The Priory Bar.

Offering fans of music the chance to discover and uncover talent in Glasgow’s city center, TTV will own the top live music venues in the city for more than 12 hours of electric sets.

Speaking about the new announcement, TTV CEO and Festival Organiser Chae Houston said: “This year’s Tenement TV is really heating up, it’s so exciting for the team to see a line-up come together like this. There’s a real mix of touring bands, alongside established and well-loved local acts.

“Then there’s the up-and-coming acts that TT16 gives a platform to. You could easily discover the next big thing at this year’s festival and that’s what we’re all about.”

Tenement Trail are also delighted to reveal that Tennnent’s Lager will return as the sponsors of this year’s festival.

Tickets are on sale now via this link – http://bit.ly/TT16_TICKETS