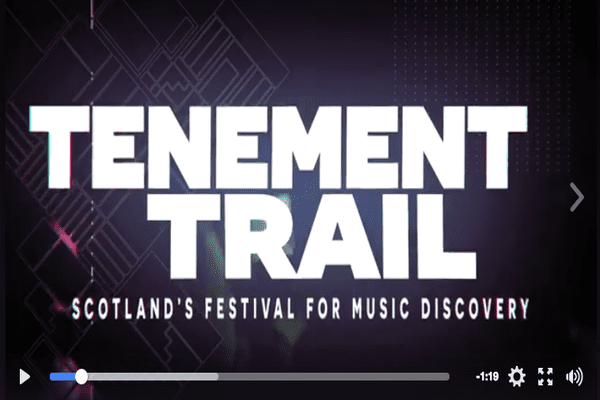 Tenement TV – the team behind Scotland’s biggest and best platform for music discovery – are dlighted to reveal TWENTY NEW BANDS joining the city music festival line-up. Fresh from playing TRNSMT festival at the weekend, Louis Berry, Clean Cut Kid, Neon Waltz and Vistas join an array of amazing talent. These new bands join the already announced headliners, The Temperance Movement who are set to shake the walls of the 02 ABC on Saturday 30th September 2017.

Tenement Trail is now in its 5th year and promises to prove just why it’s reputation as Scotland’s festival for music discovery is so strong with this new line-up. The event is sponsored by Tennent’s Lager and promises over 12 hours of the best music across 10 music venues including O2 ABC, O2 ABC2, The Garage, G2, The Attic, King Tut's, Broadcast, Nice N Sleazy, The Priory & Flat 0/1.

Tenement Trail will bring the very best in local talent as well as an incredible mix of international touring bands, bringing life to the best live music venues in Glasgow. The line-up features a massive mix of female artists on the line-up, celebrating the immense female talent around the UK right now.

Guitar heroes and Scottish icons, The Temperance Movement’s two hit records, a tour with rock ‘n’ roll royality The Rolling Stones and sold out shows across the country all notable in their success story. If their last sold-out Glasgow Barrrowlands’ show in 2016 is anything to go by, we’re in for surfing crowds, pints in the air and a rock ‘n’ roll performance powerful enough to alight any Saturday night.

Tenement TV Founder Chae Houston commented: “We are beyond delighted with this announcement and feel Tenement Trail is really set to show why it’s such a well-loved event in Scotland, this year. Louis Berry put on a phenomenal performance at TRNSMT this weekend and we’re thrilled to have him tipping the bill alongside the incredible The Temperance Movement.

Tennent’s Lager Sponsorship and Events Exec, Nicola Cooper added: “Tennent’s Lager have been supporting Scotland’s live music scene for over two decades and Tenement Trail is the perfect collaboration for Scotland’s favourite pint! We can’t wait to unveil more exciting bands alongside Tenement TV and bring the biggest ever Tenement Trail to the masses this September.”

Tickets for Tenement Trail 2017 are on sale now. Over 50 bands will tip the bill of this year’s festival so fans are urged to purchase tickets quick to avoid disappointment.