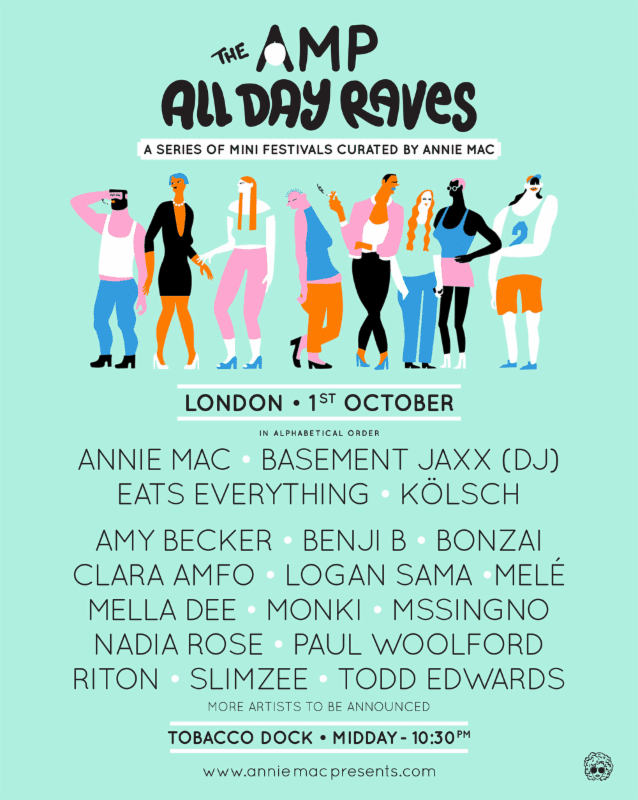 The one and only Annie Mac has announced a series of mini festivals across the UK. Dance music's first lady will be personally curating the lineups for each event as her razor sharp musical instincts unite international heavyweights, brand new talent, timeless classics and tomorrow's cutting edge into a signature trilogy of events.

The London event will be held at the Grade 1 listed Tobacco Dock. An extraordinary fusion of industrial grandeur and warehouse abandon, Tobacco Dock's array of individual rooms and breathtaking central space make it the perfect setting.

Having recently taken over Radio 1's most influential show every evening from Monday to Thursday, alongside continuing her much-loved Friday night slot, Annie's growing event series stands as further testament to her award winning selection skills, honed for well over a decade in the industry.

The forthcoming event follows second year sell-out at her self-curated festival, Lost and Found in Malta, which has gained serious reputation as an unmissable sun drenched season-starter. The festival, alongside the highly anticipated annual 'Annie Mac Presents' compilation series and events of the same name truly justify her global status as leading lady and purveyor of dance music.

The first wave of artists announced include Brixton based duo Basement Jaxx, who'll bring their big beat and house sounds to the warehouse. The appearance comes following a hectic touring schedule and Planet Battagon's recent release on own imprint Atlantic Jaxx, acclaimed by the likes of Gilles Peterson.

Paul Woolford will drop other pseudonyms to bring piano house anthems and club stompers behind the booth ahead of new release series 'The Seven Works Of Mercy'. Larger-than-life beat maker Eats Everything will also be present at Tobacco Dock, one of the few producers in the history of dance music who have made such a rapid and far-reaching impact on the electronic music scene.

House legend, Daft Punk collaborator, and Grammy winner Todd Edwards will also be on board, known for his hypnotic collage of cut-up samples over swung beats and lively disco-flavored baselines, his four-to-the-floor beats have earned him a passionate following.

Bringing his shimmering melodic sound to the London warehouse on Saturday 1st October, Danish Kompakt records producer Kölsch is renowned for conjuring moments of real magic. Well known for his productions, Kölsch has sold over a million records all over the world under his many different monikers.

North West heavy-weight and electronic tribal-house connoisseur Melé will also be present for the all-day event, alongside DJ and Producer Mella Dee who's rave-ready techno sound has emerged across the dance floors following his latest release on Dusky's 17 Steps label.

Straight off the back of a hefty summer season, Monki's dancefloor-ready, bass-fuelled house sets will bring the heat to the East London venue. Fellow Radio 1 resident and one of the UK's most respected DJ's Benji B will also join Annie on the line-up. Alongside an early-morning Radio 1 show, and his Deviation show on Swiss radio, Couleur 3, his local Deviation nights are known for their pioneering programming, whilst fellow Radio 1 host Clara Amfo will also play.

Ahead of the relaunch of his Slimzo's label this year, Godfather of Grime, Slimzee is also on board for the all-day event. The Rinse FM founder and NTS host's sets are a barrage of bangers, compiled through tacit knowledge of the scene. Renowned Grime DJ Logan Sama follows suit, showcasing the sounds of a revitalised scene. Croydon-based Nadia Rose will also appear with the quick-fire, crazy flow with which her performances have become synonymous.

Following appearances on Boiler Room, NTS and Rinse FM which propelled her to the forefront of the UK bass scene, Amy Becker will bring her unique genre shifting sound to the warehouse. The all-day event will also boast London-based house DJ Riton, XL Recordings MssingNo and the hugely-talented, rising R&B star, Bonzai.

With more acts still to be announced, the party looks set to be another stand-out event underneath Annie Mac's ever-expanding global repertoire.

"Welcome to the next endeavour for AMP – taking our experience of Lost and Found festival in Malta and creating mini- festival experiences in three of our favourite party cities – London, Leeds and Birmingham. Each party will have multiple rooms providing contrasting music both from live artists and DJs. In typical AMP fashion the line ups are musically diverse with legends and brand new artists sitting side by side. Get ready to experience new and brilliant music and to dance to your favourite classics, and best of all the parties start at lunchtime! Looking forward to seeing you all for some serious day raving" Annie Mac xx

THE PRE-SALE IS NOW OPEN, WITH GENERAL TICKETS AVAILABLE FROM
THURSDAY 14TH OCTOBER AT 10AM  VIA bit.ly/AMP_LDN_TT